At Disrupt yesterday, one of the most interesting talks was with Golden State Warriors forward Andre Iguodala. Other than being the MVP of the latest NBA Championship series, Iguodala is a businessperson. He’s looking for cool companies to work with, fun projects to work on and the latest in Silicon Valley trends.

It sure helps that he’s on the Golden State Warriors, a team located near all of this noisy entrepreneurship. We see a lot of “celebrities” getting involved in tech investing, but Iguodala is different in that he truly sees the big picture when it comes to companies like Tristan Walker’s Bevel, or the company he worked with through its acquisition, Twice.

One of the most interesting bits of knowledge that he dropped was on wearables. While we’re all trying to think about what the killer app will be for consumers, Iguodala says that athletes are already reaping benefits from the devices. 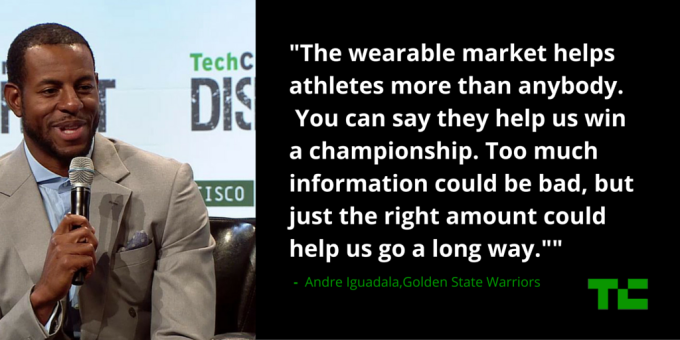 While wearables aren’t just for athletes, Iguodala gets that collecting data leads to building a great product that can benefit any number of verticals.