Startups, it’s time to get your act together and apply for the Startup Battlefield at Disrupt London on December 7-8th. We’re looking for the most promising companies from London to Budapest, Madrid to Stockholm, and everywhere in between.

Maybe you were out on vacation. Maybe you were focused on that key hire. Maybe you started but forgot to finish the application. Whatever the reason, TechCrunch is giving you one more week to get your application submitted by September 30th at 9pm PDT. Do it here.

Why apply? Aside from stage time and feedback from judges like Klaus Hommels
of Lakestar Capital, Sonali De Rycker of Accel Partners and Daniel Waterhouse of Balderton Capital, Battlefield teams have a lot more behind the scenes to be pumped about.

For starters, companies receive pitch coaching from TechCrunch to ensure they knock the socks off our judges. Teams will also receive a free booth in the Battlefield section of Startup Alley to network their way to glory, as well as the opportunity to rub elbows with our speakers and judges at our VIP events. The winner of the Startup Battlefield will also take home the coveted Disrupt Cup and a $50,000 grand prize.

Since 2007, the 500+ Startup Battlefield alumni have raised $5.2 billion after appearing on the TechCrunch stage, and 67 have exited. The Battlefield has helped give birth to companies like Fitbit, which spiked more than 50 percent in its recent IPO and Zenefits, the HR startup that just raised a $500 million Series C round at a $4.5 billion valuation.

Could your startup be next? You won’t know unless you apply. Check out the FAQs below and get it done now. 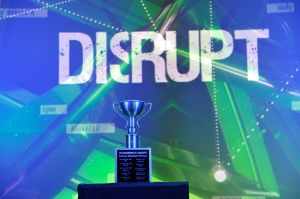 So, are you eligible?

Both Europe and non-Europe based teams are eligible to apply. Last year’s batch was quite the poster child for the EU. Participating startups hailed from Austria, Belgium, Croatia, Czech Republic, Ireland, Finland, France, Germany, Israel, Russia, the U.K. One U.S. based company even managed to make it in and claimed the number two spot.

The Battlefield has no funding minimum or maximums to participate. TechCrunch has seen teams in the “garage stage” all the way up to several million dollars in funding that are spinning off university research. That being said, most participating startups would consider themselves to be seed stage.

Startups from all verticals are eligible to participate in the Battlefield. Recently, the Battlefield has been the launch vehicle for startups in batteries, biotech, bitcoin, cloud computing, consumer hardware, dev tools, education, fintech, ecommerce, healthcare, emerging market connectivity, security and many others. Creating a new market? We like that too.

Anything you should watch out for?

One of our goals at TechCrunch is to bring new, interesting startups to light for our audience. Battlefield startups should for the most part be under the radar and should not have a lot of previous press. Demo day wrap-ups or short, announcements for a beta product are usually allowed.

Where is this happening?
Disrupt London will be hosted at the “Copper Box” Arena in London’s former Olympic park, December 7-8th.

How do you apply?
For more information and to apply for the Startup Battlefield visit http://apply.beta.techcrunch.com/ and submit your application by September 23rd at 9am PT. Startups will find out if they are selected in late October.

If you’re looking to find out more about Battlefield alumni, judges or the process in general, check out the Startup Battlefield Hub.

More questions?
Email battlefield@beta.techcrunch.com and we’ll do our best to get back to you in a timely manner.