Anari Sengbe hopped up on the TechCrunch Disrupt SF 2015 Hackathon stage today to present an app with an aim to help ganja consumers enjoy smoking weed and eating at the same time. Enter FoodHigh.Club, an app that locates good food for stoners, based on peer reviews.

The idea came to Sengbe last night while toking and coding in the midst of our Hackathon mayhem. “I can’t hack without smoking,” Sengbe said, flashing a big smile.

Hackathons are long (ours is 24 hours) and one is bound to get the munchies at some point – particularly if one is taking several hits from a joint. A lightbulb went off and the gaming startup founder by day brought forth FoodHigh.Club.

The app is only available on Android for now – iOS will follow soon. Fans of Mary Jane simply pull up the app and either “spark,” which introduces a list of recommendations already available from various restaurants nearby, or they can start a conversation with other smokers and add their own recommendation.

Users can also find good food based on the strain of weed they use. “You start wondering about people who try different strains and what kind of food tastes good with it,” Sengbe said.

Those using the app start to identify relevant food for their needs as others vote up or down different recommendations but can’t order tasty fare through the app yet (Sengbe just made it yesterday so partnership orders would be difficult to have already). Instead, it brings them to the restaurant websites for ordering. Sengbe told me the goal is to eventually integrate restaurants for a seamless ordering experience. 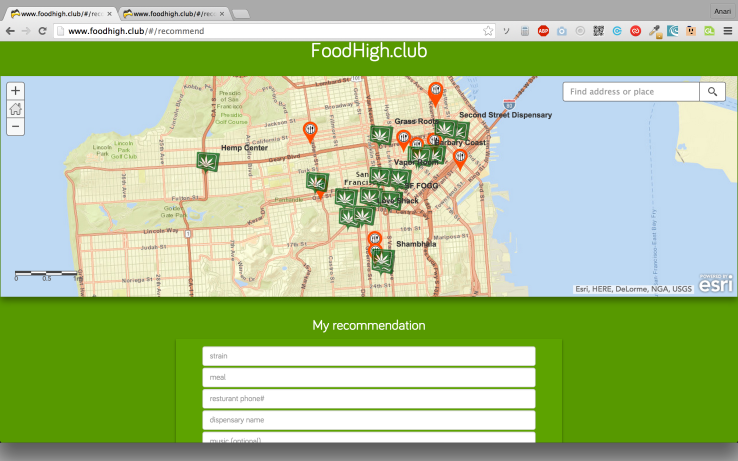 Often marijuana-focused apps adhere to local law. However, FoodHigh.Club does not sell weed. It just hooks stoners up with good food. It’s also important for Sengbe to maintain privacy. “People may not want everyone knowing they are high and hungry,” he said.

The goal is to keep users as anonymous as possible. The app does not require users to upload a legalized medical marijuana card or personally identifying info and all payments are made through bitcoin. It’s not clear how that info will remain protected when orders eventually go through the app and restaurants will need to know where to deliver.

Regardless of your politics around marijuana use, legalization or food, the app is a fun idea – and comes from the genius of a badass multilingual, self-taught programmer who came to the United States from the war-torn country of Sierra Leone.

Sengbe is also the founder of gaming startup Gamerholic, which lets users earn bitcoins for winning online games. He and his co-founder are currently on the hunt for some seed funding for his gaming startup.