Arthur Chu Contributor
Arthur Chu is a lifelong geek who catapulted into notoriety in 2014 for "hacking" the game show Jeopardy! and has been commenting about nerd culture in the digital age ever since.
More posts by this contributor

Joshua Goldberg is a piece of work.

He’s been a feminist anti-porn campaigner, a militant Zionist, a white supremacist neo-Nazi and, most recently, an ISIL-aligned Islamic fundamentalist, whose plot to bomb a 9/11 memorial event got him exposed, arrested and will hopefully lead to his being imprisoned for a long time.

People have tried to argue that the “real” Joshua Goldberg is unknowable because of the multi-headed nature of his online persona, that as a “troll” seeking to provoke reactions he can’t have any ideology.

Of course this is nonsense. He wasn’t that subtle or that smart. When he took the guise of a left-wing “PC” activist his rhetoric was an overheated caricature of the beliefs he was pretending to espouse; his personae of “Tanya Cohen” the pro-choice activist or employment lawyer Joshua Bornstein–a real person he intended to libel–were just strawmen for his “real” identity “MoonMetropolis” to knock down.

When he speaks lucidly and sincerely–when, for instance, you read the months and months of tweets he left in his MoonMetropolis identity–his beliefs are pretty obvious. That’s partly because they’re pretty standard, for Internet trolls: He’s a free speech zealot. He has a deep disdain for “SJWs” and the activist Left and especially a seething hatred for anything that resembles “censorship” or restriction of speech.

He tells the journalists behind the Sydney Morning Herald exposé that he’s repeatedly drawn to Australian targets for his trolling because of Australia’s relatively strict hate speech laws. He tried to destroy the reputation of activist Caitlin Roper after she campaigned to get Target not to carry Grand Theft Auto V on its shelves.

He tried to frame attorney Joshua Bornstein for a genocidal rant against Palestinians because of Bornstein’s support for hate speech laws. And, of course, he spent months active in the GamerGate movement, harassing and railing against feminist “SJWs” he blamed for “political correctness” in video games.

Contrary to the narrative that trolls just don’t give a fuck about anything, Goldberg evidently gave a very large and emphatic fuck about one very specific thing–the right to say whatever the fuck he wanted.

Anyone who’s spent enough time on the Internet knows that an invocation of the First Amendment, or a certain spurious Voltaire quote, is a surefire warning sign of an upcoming unpleasant interaction with an unpleasant person.

That’s not unusual. Anyone who’s spent enough time on the Internet knows that an invocation of the First Amendment, or a certain spurious Voltaire quote, is a surefire warning sign of an upcoming unpleasant interaction with an unpleasant person.

But what about the other stuff? The pointlessly destructive stuff? How does discrediting a #BlackLivesMatter activist and attacking the cause of police reform advance the cause of free speech? For that matter, how does inciting violence against a Draw Muhammad event in Garland, TX or eventually getting arrested for instigating a bombing plot against a 9/11 memorial in Kansas City advance free speech?

It’s simple. That wasn’t him fighting for free speech. That was him exercising the right that he fought for. For him, the whole point of having freedom of speech was having the power to cause pain and destruction with that speech–likely the only power that a 20-year-old basement-dwelling shut-in had.

Free speech absolutism–the kind that goes beyond calling for the government not to interfere with speech and crosses over into an entitled demand that one be given a platform to say whatever one wants without obstacle–is a position only held by disingenuous, destructive people.

That’s because for speech to be useful or meaningful it has to be filtered. Borges’ “The Library of Babel” is a story about how an infinite torrent of unfiltered information is functionally equivalent to no information at all. This simple fact is how Google became the most valuable tech company in the world without creating any content, only sorting and filtering it.

There’s a saying that “A lie can go around the world while the truth is still putting its boots on,” or, more colorfully, “The amount of energy necessary to refute bullshit is an order of magnitude bigger than to produce it.”

Sifting through a cacophony of competing voices to look for true, interesting and useful ideas is hard work; simply throwing out bullshit in order to cause trouble and get a reaction is infinitely easier. In media with very low “friction,” with low barriers to entry for speech–like social media platforms like Twitter and Reddit–the trolls have the upper hand. 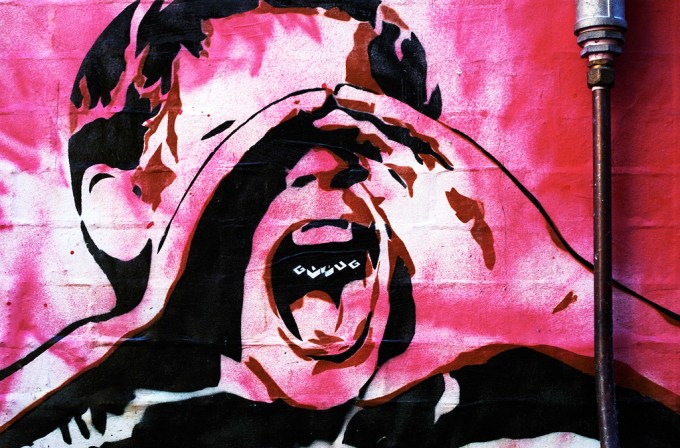 It’s a situation that’s bad for everyone. It’s bad for users who want to read true, useful and interesting content rather than horrifying trolling. It’s bad for platforms that want to make money by attracting good, constructive users that don’t scare people off with horrifying trolling. It’s especially bad for vulnerable or marginalized people who can have their whole lives destroyed by a dedicated enough army of trolls.

The only people it benefits are the trolls themselves: people who repeat pieties like “The only response to bad speech is more speech”, because they know a simplistic escalation to more speech — more yelling, more arguments, more chaotic, constantly mutating memes being flung back and forth — creates exactly the kind of environment in which they thrive.

Sifting through a cacophony of competing voices to look for true, interesting and useful ideas is hard work; simply throwing out bullshit in order to cause trouble and get a reaction is infinitely easier.

But he’s also less scary, because he was stupid. He went too far and got caught and will likely actually do time, which most trolls never do. He was stupid enough to try the one kind of trolling the government takes seriously enough to set up FBI stings in order to stop — incitement of physical violent terrorism specifically done in the name of fundamentalist Islam.

The FBI doesn’t devote resources to setting up stings for people who pull Goldberg’s other “pranks” when the attack is merely Internet defamation and abuse and the targets merely random Australians.

Hell, the FBI doesn’t even set up this kind of sting for actual terrorist threats if they’re not carried out by Middle Eastern Muslim extremists. American right-wing extremists get off easy, because the funding to investigate domestic terrorists was cut in 2009 for, you guessed it, being inimical to free speech. (It’s apparently more acceptable to police free speech of Muslims on the Internet by setting up traps for terrorists in their ranks than to do the exact same thing to Tea Partiers.)

The system that ended up catching Joshua Goldberg can’t do much about trolls even marginally smarter than he was — people who join in crowdsourced harassment campaigns without sticking their own individual necks out as much as he did; people who stick to targets they know are “safer” to attack; people who set up bot accounts to do their trolling for them for maximum deniability.

It can’t do much about the quasi-respectable outlets that gave Goldberg a platform for his dishonest, vicious trolling of Shaun King — helping lies get a head start around the world cloaked in legally-cautious phrases like “It is alleged” and “Sources report.”

It can’t do much about the more-respectable outlets that then report on the unethical reporting, and inevitably help fuel the fire by making a story out of the fact that there is a story. It can’t do anything about the cascade effect where, like rubberneckers at a car wreck, or a tongue poking at a sore tooth, or someone trying not to think about elephants (even critical pieces like the one I’m writing now) end up re-victimizing victims simply by adding to the attention being paid to people who’d rather be left alone.

I don’t have any pat answers as to what new models — technological, or legal, or social — will make the 21st century a saner, more bearable place than what we’ve got now. But I do know that this vision of “free speech” goes as far beyond what the Framers of the Constitution envisioned, just as portable rocket launchers go beyond the flintlock muskets the Framers had in mind when they talked about the “right to bear arms.”

The power to broadcast any passing thought or utterance worldwide with the touch of a button for no cost with no delay is most appealing to the least responsible among us.

It was an old saw back in those days, after all, that “freedom of the press” only applied to those who could afford a press — and the level of financial responsibility and social respectability it required to publish created a de facto filtering function for the public sphere. For better or for worse, that filter is now gone. That filter disappearing has liberated the voices of a lot of people who’ve previously gone unheard, and I’ve stated strongly in the past that I think that’s a good thing.

But the power to broadcast any passing thought or utterance worldwide with the touch of a button for no cost with no delay is most appealing to the least responsible among us. Which is why the “freest” spaces–the YouTube comment sections, the chan boards, the anonymous Reddit threads–are also the most informationally worthless and socially destructive.

Maybe the unlimited speech genie can’t be put back in the bottle. Maybe the solution involves in not curtailing freedom of speech but expressing the right not to listen, in blocklists and content filters and automated curation. Maybe Jane McGonigal’s utopian vision of a world where we create Heaven on Earth by carefully filtering out the negative voices in our environment and nurturing only the constructive ones is our way out.

I don’t know. It’s a long way from here to there. And the years since McGonigal’s Reality Is Broken have cast serious doubt on her vision of gaming environments nurturing positive, pro-social behavior among their denizens.

Until then, we’re stuck with the world we’ve got. And make no bones about it, speech right now is freer than it’s ever been. It’s easier, cheaper, faster than it’s ever been to say as much as you want, whether it’s true or false, to say it under whatever names you choose to make up, to construct whole identities and narratives out of whole cloth and present them as real.

The naive version of free speech advocacy, the one that believes the “free market of ideas” will cause truth to rise to the top and lies to sink into obscurity? That’s been put into practice. We’re seeing the “free market of ideas” play out on Twitter, on Facebook, on Reddit, in comments sections, in World of Warcraft team chat, in the email inboxes of anyone even mildly visible or controversial online.

The free market of ideas has been unleashed in all its fury, just as we’ve unleashed the free market in everything else — leaving ordinary, unlucky people to bear the costs of our grand experiment. People like Joshua Bornstein and Caitlin Roper, people like Kathy Sierra and Shaun King. People you’ve never heard of whose harassment isn’t enough to make headline news, just enough to ruin their day, or their week, or their life.

This is the utopia untrammeled freedom of expression has given us, free speech zealots. This is the brave new world you were looking for, the one where censorship is an impossible dream and every thought that can be published will be.

My God, it’s full of trolls.