According to a report by the NY Daily News, the FBI considers your retweets to be endorsements…especially when it comes to chatter about the terrorist organization ISIS. It’s not the first time.

According to court documents filed on September 16th (embedded in its entirety below), the organization tracked the Twitter-actions of and then arrested a 22-year-old Queens resident Ali Saleh:

Apparently, Saleh had been sharing his increasingly intense thoughts since 2013.

While the feds aren’t going to come to your door for a simple tweet, tweets, retweets (and maybe favs?) are indeed signals to law enforcement officials that you’re potentially heading into a dark direction. The FBI had Saleh under the microscope already, and the following retweets didn’t make them go away: 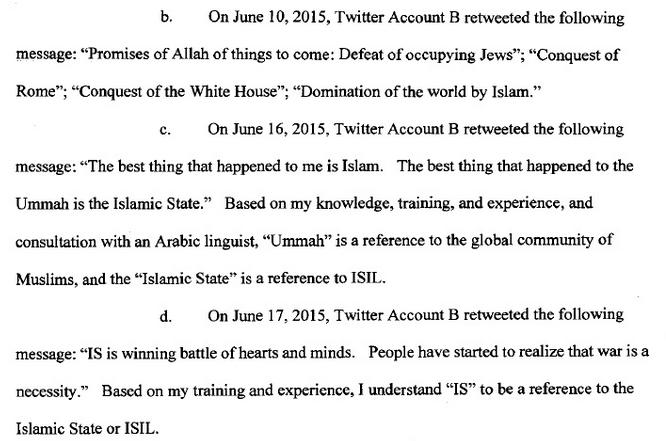 So the next time you see someone’s Twitter bio and it says “retweets aren’t endorsements” or something along those lines, know that the FBI doesn’t agree. Especially if they think that you’re planning on becoming a terrorist.

The implications here are that some officials could attempt to take these signals a little too liberally, so I’m sure that we’ll see a bunch of similar cases pop up where tweeters say that their retweets in no way endorsed a thought or group…maybe they wanted to make fun of them.

Rule of thumb is that when you’re sharing stuff publicly, it’s public. If you’re aspiring to be a terrorist, by all means keep retweeting crazy shit.