A new Bay Area accelerator, NFX Guild, has emerged on the scene with plans to run a three-month-long program twice a year for between 10 and 15 companies. It has a novel approach, too.

For one thing, there is no publicly available application process. Startups will be referred to NFX by “scouts,” after which a select number will receive invitations into the program. The scouts are mostly VCs, including from CRV, Shasta Ventures, and Greylock Partners, three firms that have helped fund NFX, which is managing $10 million and will invest $120,000 in each startup. Some of the venture firms will have already financed the startups and be using NFX to help whip their portfolio companies into shape. In other cases, NFX will work with startups that the firms haven’t yet been funded but whose progress they want to track.

NFX will also have a very narrow focus on building and growing network effects businesses, providing 30 hours of unique curriculum toward that end. (In this regard, it’s not unlike the “blitzscaling” class that LinkedIn co-founder Reid Hoffman is teaching at Stanford this fall.)

We’d guess that the startups – 16 of which just quietly graduated from its debut batch — will be getting some very strong counsel in exchange. NFX was founded by longtime business partners James Currier, Stan Chudnovsky and their Israel-based friend Gigi Levy Weiss, alongside whom they invested in a number of companies, including the live-streaming service Meerkat.

As many readers will know, Currier and Chudnovsky cofounded a popular purveyor of matchmaking and personality quizzes called Tickle back in 1999 and sold it to the jobs giant Monster for roughly $100 million in 2004.

Using their “winnings,” as Currier puts it, they later co-founded the incubator and investment firm OogaLabs, an outfit that both funded a number of networks and marketplace businesses, as well as itself produced some pretty successful companies, including Wonderhill, a casual gaming company that was acquired by Kabam; IronPearl, an analytics software company that was acquired by PayPal; and Jiff, a company that’s still privately held and just raised $23 million in Series C funding in May.

Chudnovsky headed to PayPal after the acquisition of IronPearl, staying on as its VP of global strategy and special ops before jumping to Facebook last December to work on its Messenger product as its VP of Growth. In the meantime, Currier, who’d taken a year off for a family adventure in Switzerland, began dreaming of NFX.

Why not just continue forward with OogaLabs? The big reason, says Currier, is he couldn’t extricate himself from the companies they were forming, despite their original plans to hand the startups off to outside CEOs. “What we learned,” he says, “is that when you come up with an idea and it starts to work, it’s basically a merger of your brain and the world, and if you take someone else’s brain and try sticking it in there, it ends up breaking and not working.”

Thus the new approach at NFX, which the three are leading despite Chudnovsky’s continuing role at Facebook. (Says Currier, “We’ve been business partners for 16 years, so if Stan spends a few years at Facebook, that’s basically a blip in the road.”) 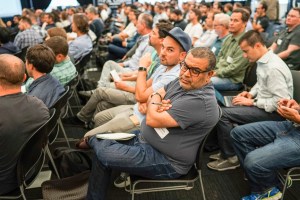 So far, apparently, so good. Just yesterday, the team held an invite-only demo day for around 150 investors who were able to casually meet with NFX’s first batch of companies, one-third of which had previously raised Series A funding, and one-third of which came from Israel.

Currier says 25 scouts sent NFX 100 companies altogether. You can read about the 16 they chose to work with below.

Starting today, NFX will start anew the process of looking for future startups it might help. Its scouts have until October 10 to submit their picks.

AnyRoad provides small businesses, concierges, and planners in the experiences industry with scheduling, booking and transaction software that lets them grow their network of relationships and grow their businesses.

5Treats enables pet professionals and pet owners to maintain and build relationships, schedule appointments and easily pay each other as they care for pets. According to Currier, the pet care services market is a $7 billion market.

Connect to a vet, doctor, lawyer, mechanic, interior designer, stylist, tutor and others in about 60 seconds over text-messaging, voice, and video calls.  Accomplish anything with the help of a live expert, 24/7.

Honeybook is an events planning and billing network that helps creative businesses and their inspired clients collaborate on memorable event experiences.

Honor provides elders with family-quality care and companionship in their own homes, along with support and the tools to manage their care from anywhere.

The online marketplace for commercial real estate providing startups and growing teams with direct access to property owners and companies sharing space.  Book with a click, pay by the month.

Pricing intelligence for peer-to-peer properties such as Airbnb, helping owners earn 20 percent to 40 pecent more, says the company. Toward that end, PriceMethod is using data to acquire inventory, and lower risk for homeowners and other hosts who want guaranteed revenue from their listings.

Rooster is a movement bringing people together to help, borrow and share with one another for free in their local communities.  Ask for whatever you need, help whenever you can. One rule: everything’s free.

A network of peer hotels that increase direct bookings, spend less on commissions, and regain direct communication with their clients.

The Restaurant Network – A market network for the restaurant supply industry www.therestnet.com

Currier insists this the first market network for restaurant supply, bringing together restaurants, suppliers and industry professionals to discover one another and transact with each other.

Yodas is a new professional graph for software developers, product managers, designers and anyone participating in product creation.  The graph, built around what products and projects you worked on, unfolds the human story behind product creation, and leads to new opportunities for hiring, team creation, consulting, and recruiting.

YouFood is a network to discover, share, and buy meals you love.

Zengaming is a place for eSport enthusiasts to create a profile, discover, be discovered, join or create a team, and then compete for fame, prizes, and sponsorships. The eSports industry is $600M today, growing over 100 percent per year, says Currier.