Tweets move markets. As silly as you might think Twitter can be, with all of its Kardashian drama, there is important information flowing within those 140-character chunks.

The example I’ve always used to illustrate this is the fake White House tweet with the quick (but massive) market dip immediately after: 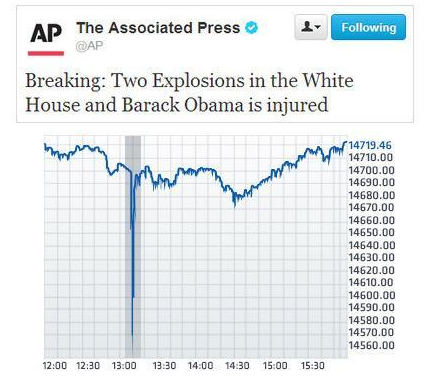 The key to making sound financial decisions is having as much information on a topic is possible and Twitter is announcing an update to its partnership with Bloomberg to bring more information to Bloomberg’s Terminal / Bloomberg Professional product. Bloomberg’s been providing Twitter data to its customers since early 2013, the first financial platform to do so. I once asked my colleague Alex Wilhelm what he wanted for his birthday. His response? A Bloomberg Terminal. People sit at these things all day to get data about what’s going on financially in all sectors. 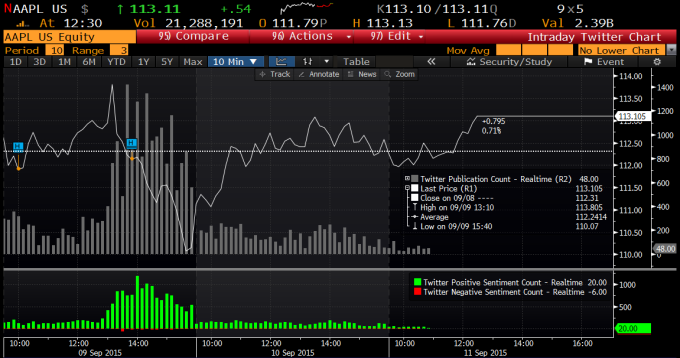 In regards to the Bloomberg tie-in, Twitter’s VP of Data, Chris Moody told us:

Our agreement with Bloomberg highlights the growing importance of Twitter in driving investment and trading decisions. Increased access to this information through the Bloomberg Professional service will continue to accelerate as the adoption of Twitter data through the financial services community grows in importance.

Financial terms of the deal (both previous and expanded) weren’t disclosed but data is a big business for Twitter, which is why the company acquired data management company Gnip for $134M last year. Up until now, that data is mostly used for marketing purposes or other consumer-related applications. The Bloomberg partnership, albeit unique, is proof of the treasure trove that the company is sitting on.

At this point, any chatter can signal an impending change in the financial markets. Remember the zillion times that Carl Icaahn has tweeted about Apple?

Just bought $500 mln more $AAPL shares. My buying seems to be going neck-and-neck with Apple's buyback program, but hope they win that race.

Bloomberg’s Global Head of Product, Ben Macdonald, says that Terminal customers are looking for “early trends, breaking news, and sentiment shifts” and since Twitter is real-time by nature, the data is a perfect firehose to pipe in.

The new agreement will allow Bloomberg to offer its customers a live feed of curated tweets, alerts on activity that could signal a spike or other important chatter, historical graphing and sentiment analysis.