Nearly a year ago, Google launched a new mobile application called Google Primer, offering startups mini-marketing lessons aimed at helping users get up to speed on Google-specific subjects like search engine marketing, media coverage, content marketing and more. However, at the time, the app was still in testing, and Google wouldn’t comment on the project. Today, a redesigned Google Primer is officially launching with an expanded lineup of lessons that also include topics like mobile site design, programmatic buying, and search advertising, for example.

The company notes that every week, more lessons will be introduced.

In addition, the app is also now available on Android, following its iOS debut last October.

Explains Google, the goal with Google Primer is to help marketers, whether small business owners or those working inside a larger company, keep up with the tools and skills that help them do their jobs.

The app makes this easier by offering “bite-sized” lessons that can be viewed while offline, so you can learn while on the go – like waiting in line for coffee, on the plane, on the train to work, and elsewhere. 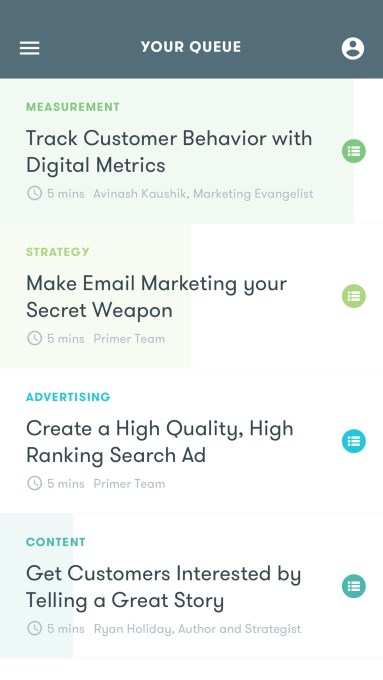 Google Primer users will be able to store their progress in their profile, plus saved content or share with others who may find it useful.

While the original version of the app featured more introductory-level content, Google Primer’s lessons today will include a wider variety of content, ranging from basic to advanced topics. But the lessons will  be “jargon-free,” says Google, making it easier for those who are new to marketing to understand the concepts presented.

The content in the app is co-developed by industry experts and Google, which works with the experts to simplify the language used for Primer users and add related interactions to accompany the lessons.

The revamped version also includes personalized “next steps” – meaning short activities that follow each lesson to give users a customized starting point. This activities could be things like letting customers know you’re having a sale, announcing new products, sending out birthday greetings, and more.

The idea here, obviously, is to use Primer as a tool to onboard new customers of Google’s products and services. And while that’s Google’s ulterior motive with an app like this, for those who are already interested in using Google’s suite of tools, the app could be a welcome training aid.

Google Primer is a free download on iTunes and Google Play.