A big reason developers hate mobile websites is that they lack the push notifications which help re-engage people with native apps. That was a serious problem for Facebook. It sees a ton of users on its m.facebook.com site, especially in the developing world where data budgets are tight, but had trouble pulling them back in. So today Facebook announced that after working with Google on its new mobile web alerts standard, m.facebook.com mobile web users can now opt to receive push notifications via Chrome. 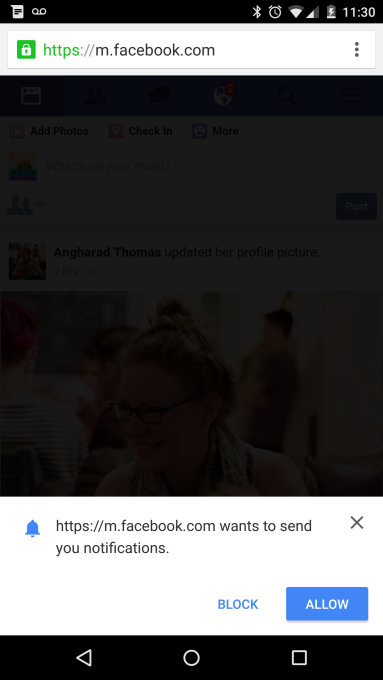 Google first announced the development of its third-party push API through Chrome back in April and noted some partners like eBay and Vice News who had committed to implementing the standard. Now Facebook has rolled out the feature,  so mobile Chrome users on m.facebook.com will be asked to turn on Chrome pushes. Facebook’s product manager on browser partnerships Jonathan McKay tells me that already, “We’ve seen an increase in visitation from launching push notifications.”

Push via Chrome is “a great lever for re-engagement to the site [from]…people who might not use Facebook as much”, McKay explains. “This is pushing the best content out to them so they don’t have to proactively go to the service.” That could mean telling them to come back if a friend got married or they’ve been tagged in a photo. Without these push alerts, mobile web users might have never realized there was something urgent to attend to on Facebook. Google hopes to see adoption of its mobile web push notifications standard by other browser makers too. “Now it’s shipped stably for both us and Opera, and it’s landing on Firefox 42 in November” says Owen Campbell-Moore, Google’s associate product manager on the feature. UC Browser from Chinese company UC Web is also supporting this to bring it to emerging markets.

One challenge is duplicate notifications. With the mobile site joining Facebook, Facebook Lite, Opera, and other ways to get pushes, users could be exposed to alerts they’ve already seen. Nate Schloss, a Facebook software engineer working on the integration says this could get annoying. McKay laughs that while he was testing it, “There was period of time me and Nate were getting 9 notifications anytime anyone did anything. It was like a minute of buzzing.”

The companies are hoping to devise ways to limit those duplicate alerts by detecting what someone’s preferred interface is and only pushing them there. Done right, push notifications could help the mobile web compete with native apps. Not every business or service needs a full-scale native app. Now they could get the re-engagement opportunities of native with the ease of construction that the mobile web provides.

By working together, the teams tell me Facebook was able to get assistance nailing the experience, while Google got to learn about bugs and issues that only appear at Facebook’s enormous scale. That was a big theme of today’s Facebook @Scale engineering conference that drew coders from across Silicon Valley to a day of these kinds of announcements. Tech giants don’t always have to compete.