On the heels of launching donation gift cards for the homeless, HandUp hosted a community outreach day this past Friday in San Francisco to continue to bring awareness to homelessness, as well as give people a way to engage with the homeless community.

In partnership with Project Homeless Connect, HandUp hosted a homeless outreach day, featuring San Francisco city officials, employees from Dropbox and Zendesk and others. The event kicked off with a rally at The Hall, a hub of restaurants in downtown San Francisco.

“I had the privilege of meeting Rose Broome and learning the mission of HandUp at the very, very beginning and I so believe in it because I think it is so palatable, that when you forget the humanity of the people who are on our streets, that’s when bad things happen,” San Francisco Director of Housing Opportunity, Partnerships and Engagement Bevan Duffy (pictured above) said at rally. “That’s when you think that a police officer is in a better position to solve homelessness by moving somebody from one block to the next.” 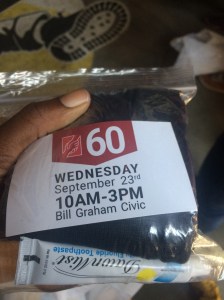 After the official kick-off, we were separated into four groups of five people, on average, each led by a community advocate to take us into areas of downtown San Francisco where we could be of service to homeless people. Then, we hit the streets, equipped with hygiene kits including shampoo, deodorant, soap, a toothbrush and toothpaste, socks and a flyer for an upcoming event at the Bill Graham auditorium where people can access resources like Medi-Cal, dental and vision care and employment assistance.

My group leader was Del Seymour, the director of Tenderloin Walking Tours. He told me that he had spent 30 years living in the Tenderloin without housing. Now that he’s gotten back on his feet, he’s dedicated to giving back to the community. Others in my group included HandUp Founder Rose Broome and a couple of Zendesk employees.

“This is the first time I’ve given out hygiene kits,” Broome told me. “I’ve done street walk but I don’t get used to it. I don’t get used to seeing poverty the way that it looks here. People on the streets here are sick, injured. A lot of the people here seemed really happy to see us. A lot of the people were really gracious. I feel like it’s a small thing that we can do that can help. It was exciting to meet a HandUp member along the way who saw my shirt and see how HandUp helped him get money for medicine.”

I was lucky enough to witness that moment between Broome and HandUp member Dwight. His eyes totally lit up when he saw Rose’s HandUp t-shirt, and expressed a lot of gratitude for what he’s been able to access through HandUp. Using HandUp’s online crowdfunding platform, Dwight was able to raise $150 from supporters and then, even better, Google matched the donation. That $300 was enough for Dwight to pay for his much-needed medicine.

Each of the volunteers who participated were also given two $25 HandUp gift cards to give to people. The gift cards, which HandUp launched about two weeks ago, enables homeless people to redeem them at Project Homeless Connect in exchange for food or other goods.

Since launching the gift cards, Broome says that Project Homeless Connect has been at max capacity with people flooding the offices to redeem gift cards. In order to make redeeming easier for people, and take some of the load off of PHC, Broome says she’s currently seeking out other locations throughout San Francisco that would be willing to act as a place of redemption for the HandUp gift cards.

Anyone interested in supporting the homeless through HandUp gift cards can order them here. To date, HandUp has raised $850,000 in funding from investors like Jason Calacanis, Marc Benioff, Eric Ries and SV Angel.