The system consists of a translation service built on top of an intelligent translation engine. Translators sign up for work, then customers looking for translators can search by language, business skills and so forth. The platform currently supports 22 languages and 45 language pairs such as Spanish to English.

The smart part comes in because the translation system actually learns from the translations happening within its system. It begins to recognize translation patterns, so that if it sees a particular way of translating a phrase, it will learn that is the correct way of saying it — essentially learning what’s correct and what isn’t.

“So over time the system gets smarter and better. It monitors the behavior of the editors and reports [common] translation mistakes back to the community,”Unbabel CEO Vasco Pedro told TechCrunch.

The customer pays a per-word price, and the goal of Unbabel is for translators to translate at least 800 words an hour. Since the translators are paid by the hour, the faster they go, the more Unbabel makes. That’s why it’s in their best interest to find ways to speed up the process, while reducing errors.

That’s the goal behind the new Smartcheck feature.

The new feature helps translators as they go through the translation process, not only pointing out possible errors, but also offering helpful hints about how to correct the problem. 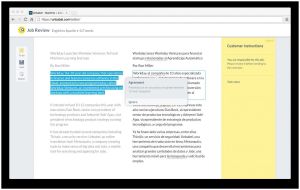 “As the translator types the translation, it gives them hints and highlights areas that need work,” Pedro explained.

This could be as simple as a spelling issue, telling the translator to avoid subjective words or that the writing style is not in line with the customer’s.

The system learns what these hints are from monitoring the translator work inside the translation engine. This the point where the human and machine parts of the system begin to align.

The company currently has about 32,000 translators on the platform with 380 customers. In July it had its best month ever, surpassing $100,000 in monthly revenue for the first time, according to Pedro.

It is in the process of moving to a subscription model where customers pay a fixed rate up to a certain of number of translated words.

The company participated in the Y Combinator Winter 2014 class and has raised $1.5M.