Your profile picture is the message you send most. There’s no easier, more ubiquitous way to raise awareness for a cause then splashing your pic rainbow for gay rights or green to promote the Arab Spring.

Now Facebook is giving people a tool to leverage this tiny billboard. With its new Temporary Profile Picture feature that’s slated for a broader rollout, you can change your pic but have it revert to your old one after a set number of hours, days or weeks.

While it could prevent stale memes from squatting in people’s profile pics, the feature could also encourage pics that don’t show people’s faces, making them harder to identify at a glance. You can argue it’s a shallow way to support a cause, but it’s better than total apathy. Still, people who really want to make a difference might consider sharing links to donate time or money to related charities instead of just this clicktivism. 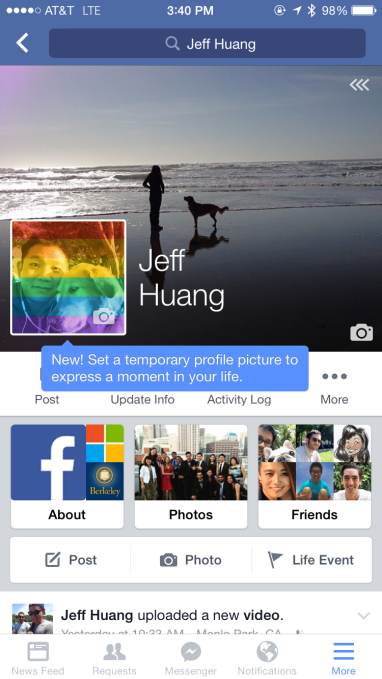 I received a report of the feature from one of TechCrunch’s readers (thanks Suki B aka @ForkToPen), and when asked to confirm the sightings, Facebook admitted it’s testing the feature with a small number of users, and hopes to roll it out more broadly in the coming months.

Unfortunately we don’t have an image of the actual expiration selector right now, but the company explains:

Those with the feature will see the option to set an expiration date when they select a new profile picture. When the expiration date hits, their profile pic reverts back to their old one without publishing a News Feed story announcing the change. Their temporary one will still be visible in their album of profile pics.

Facebook is wise to inform its product roadmap with the emergent behaviors of its users. At least 26 million users turned their profiles rainbow to suppor the right to gay marriage. In some ways, the feature could help prevent awkward situations where people end up with a profile photo related to a passed campaign or expired meme.

But the feature also has the potential to make Facebook tougher to use. Profile pictures appear all over the app, and being able to quickly recognize a friend from their familiar headshot makes the app less cognitively taxing. If everyone uses temporary profile pics that don’t show their faces, it makes their friends’ feeds feel more foreign, and it forces them to read their name to know who they are.

It’s a double-edged sword, but Facebook clearly thinks it will make the social network more current than chaotic.