The fitness wearable space is becoming increasingly crowded and many users are feeling their excitement wane. Japanese startup Moff, however, believes the space still has plenty for innovation.

Moff announced earlier this week that it has raised $1.3 million in seed funding from Bandai Namco Entertainment, one of Japan’s largest gaming companies, Orso, and TomyK, to target growth in the U.S. The company’s wristband, which recognizes movements and is meant to be used as a game controller, shipped last year after a successful Kickstarter campaign.

Moff is already available on Amazon in the U.S., but founder Takahagi Akinori says it plans to find more distribution partners, as well as content providers and developers to help develop the wristband’s ecosystem of apps. The company recently launched a U.S. division and hired Albert Chu, whose past experience includes executive roles at Apple, AT&T, and PalmSource, as chief executive officer.

Moff plans to make its SDK, which is currently available for its content partners, open to all developers in the future. 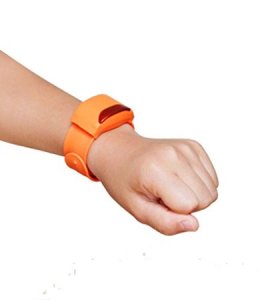 Akinori believes a rich selection of games and other apps—and Moff’s ability to be used as a controller like a bangle version of the Wii—will help it stand apart from other fitness wearables.

Moff was originally developed for children three to 10 (it curls around the wrist with a smack, like the slap bracelets that were collected by kids in the Eighties), but the company has widened its target demographic to include adults, with the idea of including whole families in games.

“I love this question,” Akinori said when asked how Moff will stand out from competitors like the Fitbit, Jawbone UP, and Misfit Shine. “Most other fitness wearables are activity trackers, targeted to running and walking, but our tech is 3D movement sensing. Moff can recognize gestures and posture change for dancing and yoga. We can detect and analyze movements. That is on the technology side. On the content side, we want to combine gaming at the same time users are exercising and tracking their data.”

The company claims that Moff’s sensors and machine learning algorithms are better at recognizing changes in body movements. For example, it will tell you if your arm is lifted in the right position while doing a yoga or dance move and suggest customized exercises.

Collecting aggregated data will also help improve Moff’s accuracy, but that depends on whether or not people buy and continue to use it. On Amazon, Moff has received mixed reviews so far. Akinori says Moff is addressing concerns by taking steps like improving the stability of Moff’s connection with its iOS app. By Christmas, Moff plans to launch an Android version.

“Our goal is to change the relationship between humans and computers,” says Akinori. “Our enemy is the screen user interface and we want to change that to a more perceptual user interface, with natural human activities and movements.”