Abra, a remittance service built on top of the Blockchain, has closed $12 million in Series A funding. Investors in the round include Arbor Ventures, RRE Ventures, and First Round Capital. Total funding to date by the company now totals $14 million.

The company’s app, which will launch soon to the general public, lets users around the world transfer funds denominated in any currency at a cost-effective rate.

Abra achieves this by instantly converting deposited currency to bitcoin, which are stored locally on the user’s device. This means that unlike services like Venmo, the company never actually touches any funds, meaning it isn’t required to deal with the regulatory issues of transmitting money.

Here’s how Abra works: Users can deposit money into the app either via a linked bank account, or by utilizing Abra’s network of Abra Tellers, which are like human ATM machines. 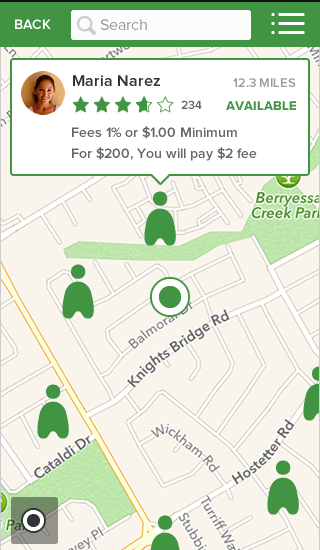 After setting their own fee, Tellers meet a user in person to accept a cash deposit and credit the user’s account with funds (or vice versa, if the user wants to cash out).

After a user’s account is credited with funds, the money is instantly converted to bitcoin behind the scenes, but still denominated in a traditional currency.

The important question is how does Abra combat bitcoin’s extreme volatility to allow the digital currency to always be pegged to fiat currency?

Bill Barhydt, CEO of Abra, explained that Abra instantly creates self-settling contracts for users, which are built on the Blockchain and assigned to a counter-party that will share in the hedge.

Basically, users are given a short contract to protect the price, while the assigned counter-party is going long on the hedge. Barhydt explained that the company has found willing counter-parties from across the bitcoin ecosystem, and they range anywhere from exchanges to mining companies.

While the behind-the-scenes work is complex, Barhydt stressed that users will be able to use the service without knowing (or even seeing) any of the complexities of bitcoin and the Blockchain. So two users could send each other $100 USD, and even though bitcoin is actually being transferred, both will just see the transaction denominated in dollars.

The company generates revenue by charging a .25 percent fee to a user whenever they transacts with an Abra Teller, and by charging a small fee to the counter-parties involved with the smart contracts.

The company, which will launch soon, is currently accepting Teller applications, and says it currently has Tellers signed up in over 80 countries.