As applications grow, over time they layer on more and more functionality. Yet the average employee doesn’t care about much of this, using only a fraction of the program’s features. Capriza is trying to simplify all of that by allowing admins to choose only the most important functions for a given job title, within a single application or across multiple enterprise programs, and present them in a simple interface. 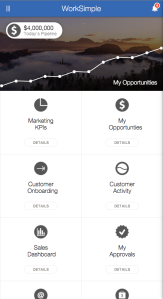 Using a drag and drop administrative interface, business analysts or IT pros can create profiles that distill the complexity of enterprise software products, giving users an interface with a set of commonly used features.

In its latest release, the company has added a level of intelligence by providing automatic updates to help surface the most important information a user needs to see. For a sales person that might be the state of his or her pipeline. For a customer service representative, it might be the number of open tickets.

As we’ve been hearing for some time, users want their work applications to operate as well as their consumer ones. While some companies have made progress in bringing the simplicity of consumer apps to the enterprise, there is still very much a mixed environment in most companies with tools from Oracle and SAP working alongside companies like Salesforce, Box and Workday.

Even the sheer number of applications, not just the individual tools themselves present a problem, explained Yuval Scarlat, CEO and co-founder of Capriza.

“We are addressing how you break complexity into a more digestible way, while connecting into older applications with a secure connection in and out,” he explained.

But beyond that, users need help surfacing information across this variety of applications they are using. Simplifying the interface to that information is just the first step, he said.

Next, and what they are addressing in today’s release is providing a better way to surface the most important information. “We need for information to be chasing you, instead of you chasing information,” he said.

This involves defining or teaching the system what workflows you are interested in. You simplify and reduce the number of steps and you define the fields and data you would like to follow.

Scarlat likens it to a car. Whereas 20 years ago, you had to be a defacto mechanic, checking your fluid levels and tire pressure yourself, today luxury cars have sensors that feed information through the cloud to a service center that contacts you when your car is reporting back with issues.

While everyone is trying to reduce complexity and surface the most important information, Capriza is offering a tool for whittling these down across multiple complex enterprise apps, giving administrators and users a chance to create more simple interactions. They can leave the applications they already own in place, while offering users a window into the information, tools and workflows that matter most to them based on their role in the organization.

The devil is very much in the details here, and the tool itself adds a layer to the enterprise software stack. In an effort to the reduce complexity, ironically it adds some, but it is trying to solve a legitimate problem in the enterprise.

Capriza has been around since 2011. It has 100 customers including Brocade, DirecTV and the City of Los Angeles. The company has raised $50.5 million across three rounds, according to Crunchbase. The most recent was a $27 million Series C last October.