While social media platforms theoretically can be a great place to document life’s special moments, the reality is that social pressure often forces us to curate and filter our content for others, instead of focusing on ourselves.

Launched last week, Spindle is a social journaling app that solves this issue by putting the emphasis on letting a user create content for themselves, and share it with friends as an afterthought. 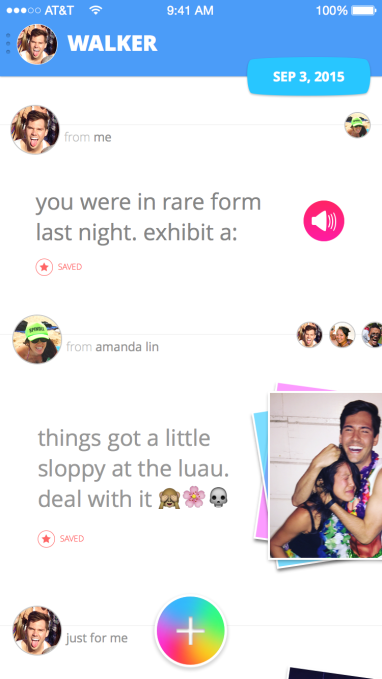 Here’s how Spindle works: Users first capture photos, text, or sound bites to be added to their own timeline.

The default setting is that content will only be shared with yourself, allowing you to create a journal of your own experiences that you can revisit down the road via the app’s time travel feature.

By freeing users from the pressure of a large audience of followers, Spindle hopes they can train users to to boost the authenticity of their content.

Users still have the option to share with a friend, which will result in their content appearing in the friend’s own timeline. The friend can then either view the message and have it disappear, or save it as a permenant entry in their own journal.

However, this doesn’t mean that you can rush to add all of your friends on Spindle. In fact, Spindle has no friending or following component, which the company explained was to remove the analogy to traditional social media.
Instead, if you want to share a post to a friend’s timeline, you just type in their name, and as long as they are in your address book you can send them a post. Alex Walker and Amanda Lin, co-founders of Spindle, explained that when users have a large audience on social platforms it tends to make their content less authentic. By letting users focus on creating content for themselves, Walker and Lin hope that Spindle will be able to be a platform where users don’t have to second guess or curate their content before posting.

In terms of its design, Spindle is playfully adorned with emojis, sketches, and badges which users can receive for maintaining good engagement with the platform. While slightly confusing at first, the UI will reward inquisitive users with easter eggs and other surprises.

While apps like Beme are also aiming to remove the metaphorical filter from social media, Spindle is the first to put such a heavy focus on telling a user that it is O.K to create imperfect content that is just kept within their private timeline.

Overall, Spindle is a unique twist in the new trend of trying to fix social media’s current authenticity problem.

Spindle is available for download now in the iOS App Store.