Usually, when you fall in love with a cool gadget depicted in the latest science fiction blockbuster, the best you can hope for is that maybe, maybe, some gifted entrepreneur will be inspired to bring it to life in the years to come.

For the most part, that’ll be true of Star Wars: The Force Awakens (coming this December, as if you hadn’t already marked your calendar). As far as I know, you won’t be able to bring home a real-life spaceship or light saber — but you can buy your own BB-8 droid, thanks to a collaboration between Disney and robotics startup Sphero.

To be clear, this BB-8 isn’t as big as the one depicted on-screen, and it probably won’t be quite as smart or independent. But hey, it’s a Star Wars droid that you can control from your smartphone or tablet, which is pretty freaking cool.

When Sphero’s Chief Creative Officer Rob Maigret demonstrated the BB-8 for me, he used his iPhone like a remote control, rolling the droid around the room. He also used his iPhone to give it voice commands — for example, telling it to go on patrol. (At that point it started moving around the room on its own, looking for enemies.) And through his iPhone camera, we could actually watch BB-8 broadcast holographic messages recorded by other users — perhaps inevitably, the message riffed on the “Help me, Obi-Wan scene” from the original Star Wars.

Maigret said that underneath the hood, BB-8 uses much of the same technology as Sphero’s existing robotic ball, but with upgrades like a new inductive charging system. (In other words, you don’t have to plug in the BB-8 to charge it. You just place it on its stand.) And of course it has the movie droid’s distinctive and weirdly endearing shape — a robotic head floating above a rotating ball. 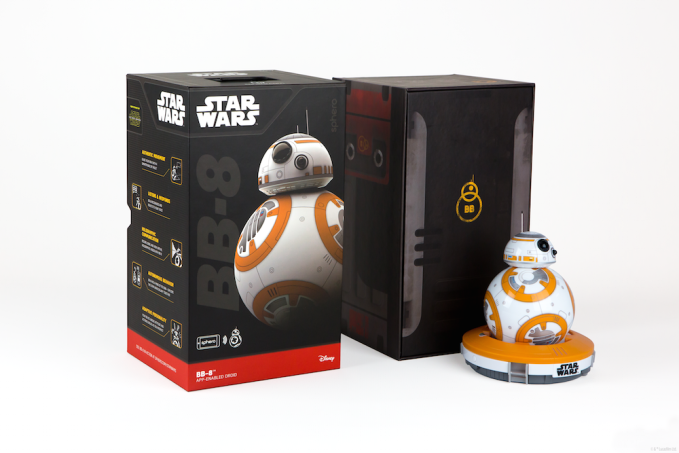 Sphero’s BB-8 will be launching tomorrow, on “Force Friday,” and will retail for $150. That may be a little steep for a toy, but as Maigret put it, “We think of it as more of a droid than an actual toy. It’s not a disposable piece of plastic. This is a piece of technology. Other Sphero products have constant iteration, and this will be the same thing. It will constantly get better.” (For one thing, he said BB-8 will actually adapt to your personality over time.)

Maigret said the partnership started about 18 months ago, when Sphero was part of the Disney Accelerator. Disney CEO Bob Iger heard about the startup and became a mentor, eventually tasking the team with recreating the BB-8 from the film.

Maigret, formerly an executive at Disney Interactive, is also a mentor at the Disney Accelerator, and that’s how he joined Sphero. The startup’s vision, he said, is to create “connected entertainment robots.” By connected, he means “connected to us, connected to the Internet, they’re aware, and their fundamental purpose is to entertain us and to relate to us.” Among other things, these robots can become devices for storytelling and media consumption, he said.

In the case of BB-8, he talked about how Sphero actually created animated scenes that it wanted the droid to act out. Once those scenes were refined, the team “pumped them into the hardware,” turning animated storyboards into physical behavior.

Over time, Maigret predicted that users will be able to program their own custom BB-8 actions (though not necessarily with official support from Disney or Sphero).

“The thing is, it’s a robot, it’s a droid — and people will figure out how to hack it,” he said. “We think that’s a good thing. We don’t have a kit that comes out on day one for it, but people will put two and two together.”

Want to see BB-8 in action? Maigret also did an on-camera demo with TechCrunch’s Lucas Matney, which you can watch above. And you can learn more about BB-8 here.