Microsoft announced this morning it’s rolling out a new version of Skype (ver. 6.0) for users on iPhone, iPad, and Android devices. Across all platforms, the popular communications app has gotten a redesign, though in Android’s case, it references Google’s “Material Design” aesthetic while the iOS version’s redesign is more focused on improvements to the user experience, including the use of swipe gestures and ways to more easily share photos, emoticons, links and your location while on a call.

On Android, Skype 6.0 introduced a new “floating action” button that makes it quicker to kick off a chat, video or voice call, or video message. This button is overlaid on top of the screen and, when pressed, these “actions” fly out for easy access.

The updated app also better displays how many unread messages you have. Now, there will be an orange-colored unread count at the top of screen by the “clock” icon while each conversation that has unread messages associated with it will also feature an orange, unread messages flag of their own.

Android users will also have an enhanced search feature that helps you find your most important contacts and conversations more quickly, says Microsoft. 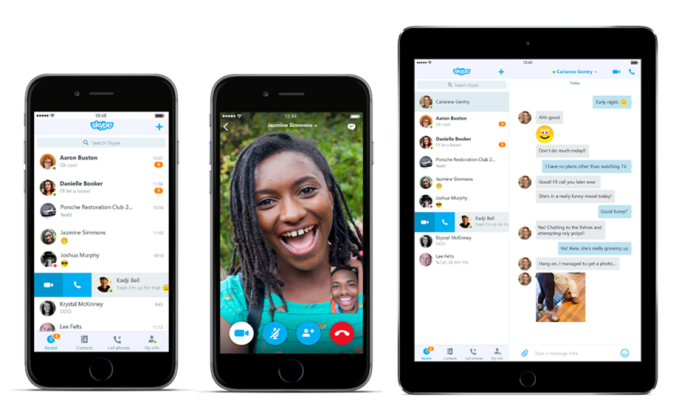 Meanwhile, the iOS release is fairly extensive, too.

Both the iPhone and iPad version introduce new navigation that relies more on swipe gestures for doing things like making calls or managing your messages. This makes sense, as users are already accustomed to using swipe gestures in other communication apps, like Apple’s Mail client, third-party apps like Mailbox or Microsoft’s Outlook, and other messaging apps, like Facebook Messenger, for example.

The iPad app has also been updated to be more feature complete with the iOS version, and now includes support for sharing your location, sending large emoticons, seeing web link previews, and easily sending and receiving photos. And, like on Android, iOS users have an enhanced search feature, too.

In addition, you can now start group chats or group voice calls on your iPad.

Microsoft notes that it will soon offer a new Windows Phone 10 update as well, but didn’t provide an ETA.

While none of the new features introduced today could be called significant upgrades on their own, what is notable about the user interface refreshes is that Microsoft is now better catering to each platform’s own unique design style when revamping Skype’s interface. On Android, that means a nod to common Android app features like the floating action button, while on iOS, it’s more about swipe gestures, for instance. This is arguably a better path than trying to give all Skype apps across platforms an identical look.

Microsoft’s consistent attention to maintaining Skype over the years following its acquisition has paid off. Earlier this week, for example, App Annie’s report on the most popular apps of all time found Skype at #5 on the most downloaded list, and #7 in the top apps by revenue list.

The updated apps are available today. Skype for Android is on the Google Play Store, and Skype for iPhone and iPad can be downloaded from the iTunes App Store.