Mozilla is beginning to preview its iOS Firefox browser, rolling it out today for testing in New Zealand, according to a company blog post. The goal is for the company to gather data so that they are able to bring Firefox for iOS to the App Store for the rest of the globe “later this year.”

Firefox specified the goal of the preview in a blog post: 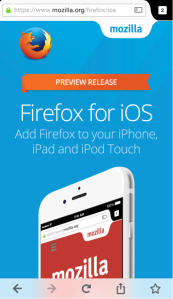 Our goal is to create a great browsing experience for iOS with Firefox. With this first public preview we will be collecting feedback in one country, before we extend availability to get feedback in a few more countries prior to a full public launch.

TechCrunch broke the news in December that Firefox was headed for iOS, since then the company has been developing the app and navigating iOS restrictions to provide as complete an experience as possible for loyal Firefox fans.

The company is using this preview to collect feedback on a few features. First, its Intelligent Search feature, which provides a mobile-friendly suggested search result experience across search providers. They are also looking for feedback on Firefox Accounts, a feature which unifies the Firefox browser experience across mobile and desktop. The preview also debuts Visual Tabs, which it bills as “an intuitive way to keep track of your open tabs.”