According to AdAge, our corporate overlord Verizon will be introducing a new logo this week. Proving that we have little or nothing to do with AOL or Verizon really, this was also news to us.

UPDATE: Verizon has confirmed the change with what looks like a rush job on the press release. If you’re interested in seeing their reasoning for changing the logo, scroll to the end of this story.

Here’s the new logo that AdAge says will be unleashed on Thursday and is being shown off internally (to everyone but us): 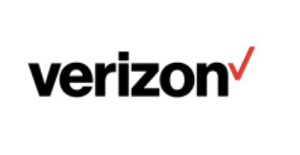 Google launched its own new logo yesterday so I’m sure all of the companies working on refreshes are chattering about how they’ll unveil their own. Apparently there was a little too much chit-chat at Verizon since this new logo has leaked to AdAge and Twitter ahead of time.

If this logo is for realsies, then it’s a welcomed sight to see the company backing off of that big ass ugly double checkmark action (insert ‘missing the mark’ joke here). It seemingly got bigger every single time I saw it. I don’t have super strong feelings about the new one either way, because I’m luckily not forced to look at their logo. I guess this one’s cleaner: 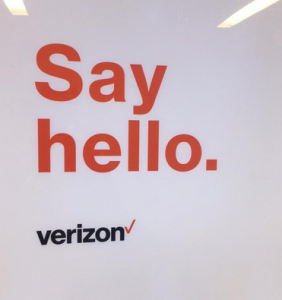 Whatever. Who cares? Anyone else want to change their logo this week? Email us at tips (at) beta.techcrunch.com.

(We’ve reached out to all of the companies blah blah blah — AOL, Verizon and a few others just in case — for comment blah blah and will blah blah update our story and blah blah blah if we hear anything back.)

UPDATE: Here’s the why on Verizon changing its logo, complete with Appley white background video:

Today, we’re introducing a new look to go along with our renewed purpose at Verizon. In a world that is constantly changing and introducing new technology, our customers rely on us every day to deliver the connections that matter to them. We make it possible for today’s always-on consumers to watch videos, listen to music, navigate city streets and stay in touch across the globe. Simply put, we deliver the promise of the digital world and we need a logo that expresses our purpose in a way that is truly ours.

Why are we changing now?
As our customers and our business evolve, so must we. The reveal of our new brand is more than just a new look. It’s a chance to further everyone’s understanding of who Verizon is and where we are going. After 15 years, the new visual identity marks the beginning of the next chapter to distinguish Verizon in the minds of consumers and signals our revitalized purpose of delivering the promise of the digital world — simply, reliably and in a way that consumers want.

The new brand identity takes the best elements of Verizon’s heritage, represented by its colors and the Verizon “checkmark,” and transforms them for a new era. At its most basic level, the new logo is a visual statement that honors our history and reflects an identity that stands for simplicity, honesty and joy in a category rife with confusion, disclaimers and frustration. It’s a cleaner, more human design and the checkmark, the universal symbol for getting things done, uniquely expresses the reliability of Verizon.

Today, we introduced our new brand identity to our employees and tomorrow we will unveil it publicly at our headquarters in Basking Ridge, NJ.

IN CASE YOU DIDN’T KNOW: We’re owned by Verizon by way of Aol. Or AOL. Or however they’re doing that these days.