The mad scientist who started Hoverboard Technologies calls his vehicle an “earned experience.” That means it’s hard to ride. Despite the name, this hoverboard* doesn’t levitate. Instead, it uses gyroscopes like a Segway to help you balance with your feet on either side of one giant rollerblade-style wheel in the center.

Hoverboard Technologies comes out of stealth today with a preview video, and will go on Kickstarter September 17 for around $4,000, shipping next year. 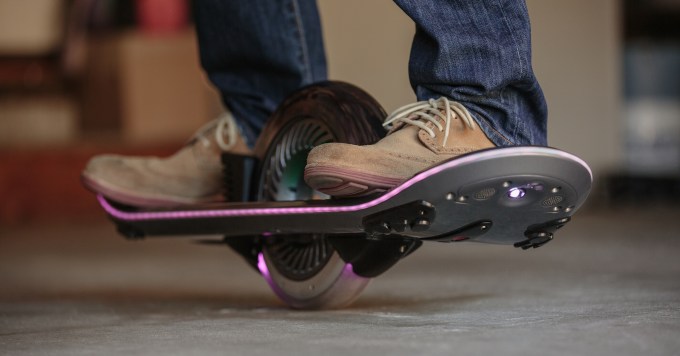 The hoverboard* is powered by an electric motor that follows your lean to accelerate or brake. To turn, you don’t shift your weight like a normal skateboard or snowboard, but instead twerk your waist to redirect it.

[* = I’m going to call the device a hoverboard but to be clear, it does not hover like real mag-lev boards such as the Hendo Hoverboard].

I spent an hour trying to get the hang of this hoverboard* and by the end I could skittishly go in a straight line and just barely make soft turns without falling off. That’s a pretty steep learning curve considering I own a Boosted Board electric skateboard, have longboarded for 12 years, can snowboard, and can stand up on a surfboard.

This is by far the toughest personal electric vehicle I’ve tried.  Expect a lot of frustration at first, similar to learning to snowboard. Even then I’m not sure you’d want to commute in traffic on this thing. 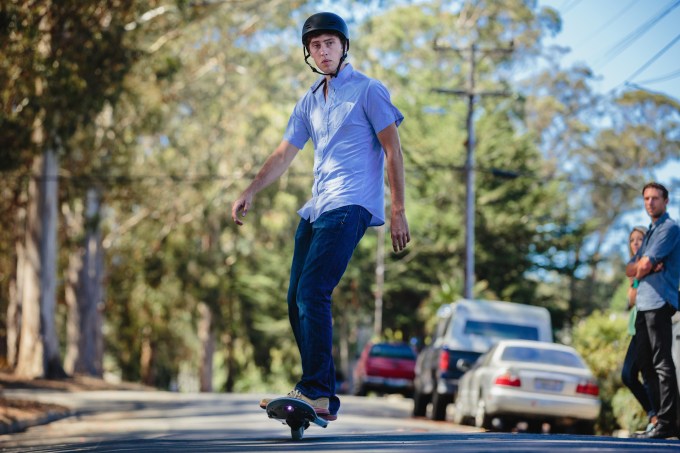 On the plus side, its range of 15 miles per charge beats most electric skateboards, and it can go 20 mph. It takes one to two hours to charge, or about 12 minutes with an optional supercharger. It supposedly can go up hills. The board is made of high-quality components like magnesium and is modular, so you could take it apart, replace pieces, or repair it yourself.

Unfortunately, the battery life and premium hardware make it extremely heavy — about 20 to 25 pounds. It’s very tough to carry by hand and won’t fit in backpacks. The cost is also seriously prohibitive. Unless you’re some wealthy extreme sports nut or want to spoil your kids, I’m not sure who will buy it.

That was never really the point, though. Robert Bigler invented this gyro skate After selling his robotic automation startup Animatics for a bunch of loot. He had dreamed of a hoverboard and was intent on birthing it into reality. He tells me that if the Kickstarter fails, he’ll just make a few dozen boards for friends and family, then call it quits.

If this thing had launched a year ago, it would probably have caused more of a stir. But since then, some real (though impractical due to needing a metal floor) hoverboards have debuted from Arx Pax and Lexus. And everyone is mislabeling those HoverTrax/Cyboard mini Segways as hoverboards.

In the end, this might just be a rich scientist’s mid-life crisis, not a leap forward in transportation. But there are worse things you could spend your fortune inventing.