Before Google decided that its online news reading application Google Reader was too nerdy and niche to warrant its further attention, a small but devoted community of consummate news gatherers were able to create “bundles” – groups of recommended sources that others could subscribe to and follow, directly in Reader itself.

Now that concept is being reborn, thanks to Feedly’s newly launched “Shared Collections” feature.

When Google Reader shut down in 2013, there were a number of contenders who wanted to step in and fill the void, including Digg’s much-anticipated Reader, startups like NewsBlur and Feedbin, NetNewsWire, Aol Reader (disclosure: TechCrunch parent co.), and more.

But Feedly has proven to one of the Google Reader replacements that has actually thrived in the years following the shutdown.

While arguably, neither Reader nor Feedly are “Google-scale” services (hence Google’s disinterest in pursuing the space further), Feedly has still amassed a significant user base. Feedly reported having grown to over 13 million users months after Reader’s demise, and last April said it had reached over 15 million users.

The company declined to provide an update on user numbers today, but notes that it’s now signing up around 50,000 new users weekly, half of which are mobile users. Two-thirds are coming in through word-of-mouth recommendations, and the remaining third are publishers who are looking to use Feedly to build ties to their most engaged readers.

These readers, even if they’re not clicking through, are valuable to publishers. On average, Feedly users read 200 stories per month, 60 percent of which are on mobile. In fact, the service is one of the top five websites for referral traffic to TechCrunch in recent months.

Feedly’s business model smartly targets those who take in a lot of information from a variety of sources on a regular basis. That includes journalists, but also researchers, educators, students, and business professionals tracking industry news, among others.

A “Pro” version of Feedly’s service, which includes a powerful search feature and integrations with third-party tools like Evernote, Pocket, OneNote, LinkedIn, Dropbox and more, is available for $3.75 per month, billed annually.

Today, Feedly has 57,000 paying customers – a mix of individuals and teams within larger businesses.

It’s this latter group who will have the most use for the newly launched “Shared Collections” feature. 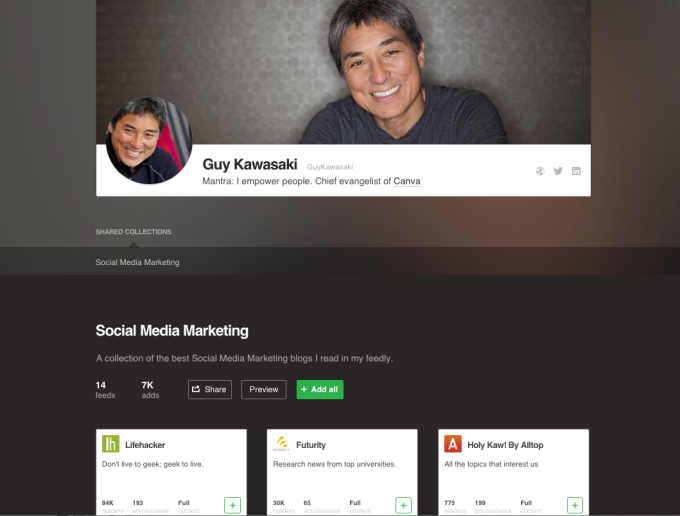 Explains Feedly CEO Edwin Khodabakchian, “better team collaboration is something a lot of our users have been asking for: there are lots of interesting use cases around marketing, sales, research where people discover, read and curate content collaboratively,” he says. “Shared Collections is the first step towards satisfying that need: it allows users to share the collection of blogs, publications, YouTube channels and alerts.”

The feature, only available to Pro subscribers, lets you create collections of reading sources which can be shared publicly or privately. Effectively, it’s a simple way to take a group of sources you’re already subscribed to and actively reading within Feedly, and click a button to make them available to others.

In addition, your “Shared Collections” now sit on a customizable profile page where you can upload your own photos, edit the description, and link out to your social media presences. While Pro users are the only ones who can create collections, all users can access them.

Collections could be used by teams for internal news-sharing, but could also work for larger organizations who want organize online resources. 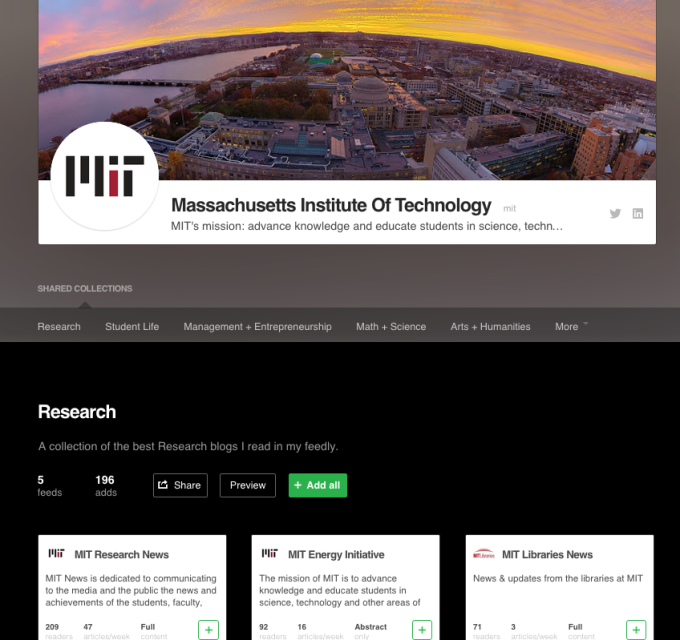 However, the addition  is just one of what will be several new tools aimed at helping business users better collaborate on Feedly’s service in the future.

The company is also rolling out a “Team” edition, which will include faster access to new stories, deeper integration with Google News, improved search features, Slack integration, and the ability to curate stories with “shared tags.”

“Team offers the benefit of creating a private context and our goal is to create a hive around that private context,” says Khodabakchian. “This becomes all the more interesting that team also allows you to access private feeds – from internal CMS or private [software-as-a-service] apps. There are some really interesting information flow problems to be streamlined at that intersection,” he adds.

In the meantime, Shared Collections are live now in Feedly, so Pro subscribers can begin building.