Hopper, a travel application launched earlier this year with the goal of helping you pay less for airfare by telling you the best time to buy tickets, is out today with a new version that will actually help you book tickets yourself without leaving the app.

Because it was initially sending traffic to third-party websites outside its own service, the company says it was unable to track whether or not its users completed their bookings elsewhere. That being said, Hopper has proven to be a fairly popular app in the months since its debut. The company tells us it’s preparing to hit 1 million downloads this month, and (assuming the tickets were booked), users have saved $15 million on airfare to date.

Tracking airfare price fluctuations in order to point consumers to the best deals is an idea that’s been around for some time. In 2008, Microsoft acquired airline price prediction tool Farecast for $115 million, and today’s airfare booking engines like  Kayak, Priceline, Skyscanner, FareCompare and others also leverage price-tracking data to make their fare suggestions.

But Hopper claims that its own “Price Prediction” technology, which monitors and analyzes billions of flight prices daily, can save users up to 40 percent on flights, and in 95 percent of cases will get you a cheaper flight…or at least one that’s the same price as you would have found elsewhere. 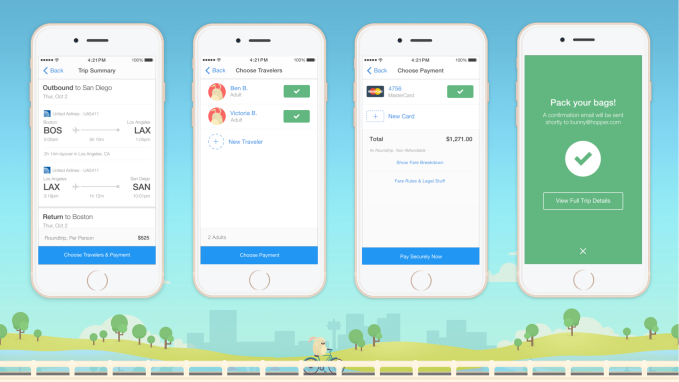 Now the app is making it easier to book those flights. The new “QuickTap Booking” feature, which is rolling out now to the iOS version and the newly launched Android app, allows Hopper users to book a flight in under 10 seconds using “just a few taps,” the company says. As it’s no longer redirecting users off-site, this could also increase users’ chances of getting the best fares since pricing changes can happen fairly quickly.

Hopper also lets users save their traveler profiles and payment information, which helps to speed up the booking process. And, as a mobile-first booking experience, the process of completing an airline ticket purchase is faster than on traditional booking websites and competing apps. That, along with the pricing data, could give Hopper a competitive advantage.

The new QuickTap Booking feature joins Hopper’s suite of tools for airline ticket shoppers, which also include the “When to Fly” calendar that color-codes the cheapest times to fly to a given destination; the “price prediction” tool that suggests whether you should wait or book now; and the “watch a trip” feature that monitors prices 24/7 and pings you if the prices are expected to drop or rise.

All of these features are available in the Android app, also launching today. 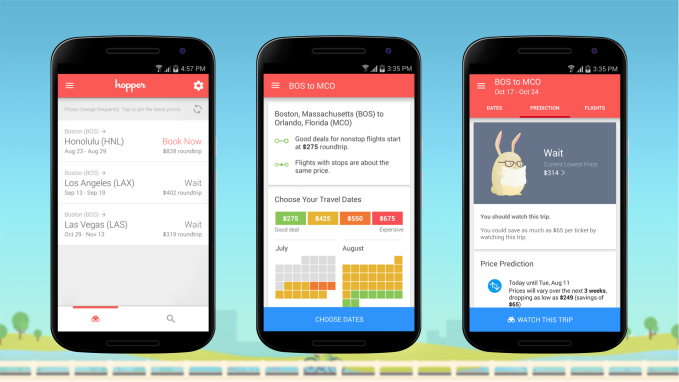 The company said last month that Hopper users had watched a million trips, and received 6 million notifications to date. However, the company had been focused on growth and user experience until now. The bookings feature will change that, as it gives Hopper the chance to compete with the bigger players in the travel ticket booking space as its business model goes live.