Facebook unveiled its M personal assistant yesterday, shelled out a few details and revealed that it was currently being beta-tested by a couple hundred random users in the Bay Area. The service is unique in that it is partially human-powered, and these “M trainers” can complete real tasks like buying items and making reservations.

Whatever M eventually turns out to be, it is clear that it is going to be different, and with so many buggy, mediocre digital assistants out there, different has to be a good thing, right?

Well, I’m not so convinced.

Digital assistants as a whole seem too forced on consumers right now, and even M is a bit out of place among them. When flip phones introduced voice control a few years after the dawn of this millennium, people were impressed, but overall it was just a great nerdy dad gimmick to show off. Now, as tech improves, giant companies are treating this very seriously. M bucks the convention of being voice-activated, it lives inside the Messenger app and is primarily text-based. This is a mistake.

Also Siri, Google Now, Cortana and (kind of) Alexa all have moments where they’re uniquely helpful, but where they are similar is that they each (mostly) live natively on their own hardware devices.

Facebook’s M doesn’t have a physical home and unless Facebook’s planning on dropping a social OS anytime soon, it’s not going to. Digital assistants desperately need deep hardware integration in order to be useful because it takes too many steps to reach the functionality otherwise and digital assistants are tools that need to be accessible at a moment’s notice.

Digital assistants are essentially more personable, smarter search engines. In a lot of ways the only difference is branding and more transparency in exposing how much your digital assistant actually knows about you. 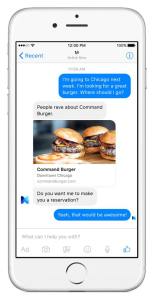 If digital assistants are search engines, than M is an “I’m feeling lucky” Google search where you’re probably just getting the one answer M believes is most likely to satisfy your need.

Facebook is already looking pretty naive with the examples they’re providing for how human interactions with M are going to look.

One person chats with M in a screenshot, “I’m going to Chicago next week. I’m looking for a great burger. Where should I go?”

In situations where you’re looking for an answer easily available in Google, like trying to find a great-rated burger in Chicago, I really really can’t understand why anyone would use M.

A) You have to type coherent sentences into M for the sake of a human understanding it, whereas in Google you could just type keywords, i.e. “best burger chicago.”

B) Search results are instantaneous, if it’s a question an M assistant has to search for, you’re literally waiting on them to Google something for you that you could just have easily done yourself.

Some Automation Will Never Be Automatic

Another chief problem with M is that even if it suggests a burger joint that you’re totally down to try out, a lot of things can still go wrong in the course of making a reservation, and every new problem means. One. More. Message.

Voice just works better for clarifying confusion. Navigating complex situations over text is never easy (as arguments with past girlfriends have made apparent). Even people with real assistants prefer to yell at them over the phone when they’re trying to explain what they want. It’s too time-consuming otherwise. 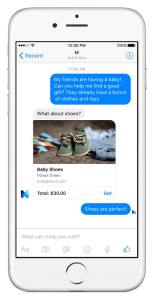 I don’t think people want digital assistants to actually do anything for them, they just want the tools to get through the discovery phase so that they can navigate the finer details without having to wade through muck.

In an article that ran on Wired, Facebook chatted about some of the tasks that Facebook employees had been using the service for, which included waiting through lengthy calls with Comcast. This would undoubtedly be useful, but am I going to have to give the M assistant all of my personal account info to do this? Are these notifications giving me constant updates? Shouldn’t I feel shitty for making another live human being deal with Comcast on my behalf?

On that note, in another one of the screenshots from the post, we see a Facebook user ask M to find a gift for their friend’s baby. How indifferent does a person have to be to tell M “yeah sure, just send something”?

I understand the appeal of text-based personal assistants, because sometimes talking to your phone is wildly impractical depending on the situation, but I can see very few scenarios where M is more useful than a google search or more importantly a dedicated app that you could just as easily open up.

Perhaps Just A Sign Of Things To Come, But Why Messages?

Most of these points assume that what Facebook introduced yesterday was really a product, when what it really launched may just be a data-gathering tool to ensure future AI success. Facebook is well-aware that most of the natural language processing technologies that today’s digital assistants are built on aren’t advanced enough to be consistently useful, but the data you give Facebook ain’t ever going out of style and they’re going to need that data to power its entrant in the next iteration of AI-powered assistants.

The problem is, data-gathering requires actual users now and I don’t think this product structure is going to garner much excitement when it launches even if it’s great at the things it promises.

For the life of me, I just can’t understand why this feature was stuck into Messages.

I assume they saw the app’s 700 million users glowing in front of their eyes as a potential market this product could conquer, but conversational text-based entry is all wrong for an app like this, even if it does give Facebook the easiest data to parse.

If Facebook wanted to craft an on-demand app where you could search for something you needed and there was an army of real life people to interpret your needs and direct you through the right UX workflow that might make sense. But typing your way through every step of a problem just isn’t practical, no matter what your need is.

It’s also a shame when Facebook knows what I like so well. Being hated on by privacy advocates is pretty much Facebook’s second full-time job, so I’d imagine they’re somewhat powerless to do something radical like giving M access to all of my profile info. And without ownership of the hardware where it could track and keep my habits protected on-device like Proactive Siri in iOS 9, it’s not going to get any more useful then Google Now or Siri in terms of background location-awareness.

AI-powered assistants will definitely, maybe one day become super useful, but Facebook’s strategy for getting the ball rolling here seems awfully meh for a company that knows me so well.