According to a new report out this morning from IDC, Apple is now the number two wearable maker, thanks to its Apple Watch, coming in just behind market leader Fitbit during the second quarter of 2015. And it’s a close race, the analyst firm found. Apple shipped 3.6 million units in Q2 2015, just 0.8 million units shy of Fitbit’s total 4.4 million units, the report states. Those figures mean that Apple now has nearly 20 percent of the wearables market, while Fitbit has just over 24 percent.

Across the industry, 18.1 million wearables shipped in the quarter, a huge 223.2 percent increase from the 5.6 million units shipped during the same quarter last year.

Even though Apple could be benefitting from early buzz around the Apple Watch, IDC still sees strong potential for the device to continue to increase its marketshare in the months ahead. The firm noted that Apple is just getting started with the Watch, having only reached 16 geographic markets to date with, and only now beginning to forge agreements with third-party retailers.

Those retailers have also benefited from Apple Watch sales, as it turns out. News from earlier this week indicated that Apple’s wearable has been a “smash hit” at Best Buy, for example. The retailer, which was the first in the U.S. to carry the device outside Apple Stores, started selling Apple Watch in 100 locations in August. But demand turned out to be so high that Best Buy says it will roll out Apple Watch to all 1,050 locations by the end of September, while also deepening its relationship with Apple to expand and improve its in-store Apple displays, begin selling AppleCare, and it will begin testing as an authorized service provider in 50 stores.

This announcement was made following the release of the company’s better-than-expected earnings which included a 3.8 percent rise in same-store sales and a 12 percent increase in profits. Best Buy CEO Hubert Joly credited Apple Watch as contributing to those numbers, saying “Demand for Apple Watch has been so strong in the stores and online.”

In addition, IDC’s new report noted that the Apple is continuing to develop its watchOS platform, which could also play a role in increasing the device’s market share in the months ahead. The next version of watchOS will allow for native applications, Apple announced at WWDC in June, and that could have a similar effect that iPhones enjoyed when native apps became available, IDC believes.

Despite being early days for the device, Apple Watch has proven to be a worthy competitor to Fitbit and other established wearables, as it accounted for about two out of every three smart wearables shipped in the quarter.

“Apple has clearly garnered an impressive lead in this space and its dominance is expected to continue,” said Jitesh Ubrani, Senior Research Analyst for IDC Mobile Device Trackers. “And, although Fitbit outshipped Apple, it’s worth noting that Fitbit only sells basic wearables – a category that is expected to lose share over the next few years, leaving Apple poised to become the next market leader for all wearables.”

Rather than trying to compete with smart watches and their many applications, the Fitbit resonates with its customers because of its simple value proposition around health tracking. 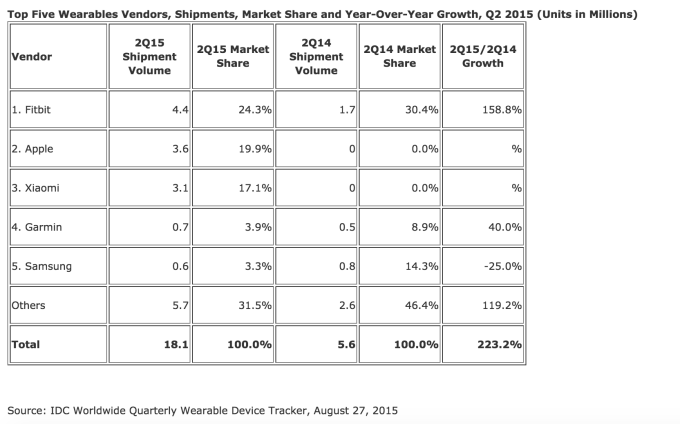