Simon Khalaf, Yahoo’s senior vice president of publisher products, today outlined some big shifts in the mobile ecosystem and unveiled some new tools for mobile developers. He made the announcements on-stage at the Yahoo Mobile Developer Conference in New York City and in related blog posts.

Let’s start with the developer tools. The first one is Tumblr In-App Sharing . Basically, it’s a Tumblr share button, but for mobile apps rather than websites. The launch partner for this is mobile photo editor PicsArt — so users can now share the photos and collages that they’ve created in PicsArt, directly from the app into Tumblr.

Khalaf noted that this should drive traffic back to PicsArt, because the Tumblr posts will either deeplink to PicsArt (if the user already has the app installed) or include a link to download. (As a result, Khalaf said the traditional blue link is “out, completely gone.”) Developers will also get to see how often their shared content gets reblogged, clinked on or liked.

Other new tools include real-time analytics for developers using Flurry (Khalaf joined Yahoo through the acquisition of Flurry), with data automatically updating every 15 seconds. And Yahoo said it will now help mobile developers integrate native video ads into their apps. 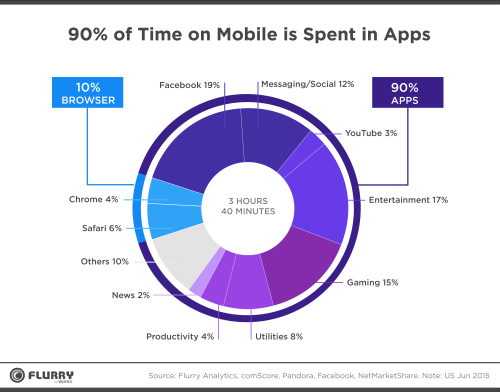 As for Khalaf’s comments about the broader landscape, he pointed to enormous growth in mobile usage, both to crow about Flurry (which he said is integrated with 720,000 apps reaching 2 billion devices — so it, uh, “beats the distribution of clean water”) and to talk about the bigger media opportunity. After all, he said average daily usage on mobile has increased from 162 to 220 minutes in 2015. The time spent in the mobile browser is a rapidly shrinking part of that pie, with more than 90 percent of time spent in apps. And media consumption (if you include the media consumption in social media and messaging apps) accounts for more than half of that app time.

Oh, and people are spending money, too. Flurry projects that in 2015, revenue from in-app purchases will grow to $33 billion, outpacing the projected $31 billion of mobile ad revenue. In other words, contrary to the fears of the media industry, people are actually willing to spend money on mobile content.

That tied into Khalaf final point, that it’s time for the television industry to “cut the cord on your end before the consumer cuts the cord on their end.”

“There’s a very simple way to do it: Liberate your content,” he said. “Don’t keep it shackled by the cable industry after 20 years of horrible consumer service. Let your content out. It’s being paid for.”