The U.K. government’s Department for Transport (DfT) has released updated statistics on the number of taxis and private hire vehicles operating in England — which shows a marked increased in the latter since 2013.

In case you were wondering, on-demand car-hailing service Uber soft-launched in London in summer 2012. Coincidence? I’d wager not.

The biggest leap in the figures is a 25.9 per cent hike in private hire vehicles (PHVs) operating in London between 2013 and 2015. Over the same period London taxi numbers increased by just 1.5 per cent: 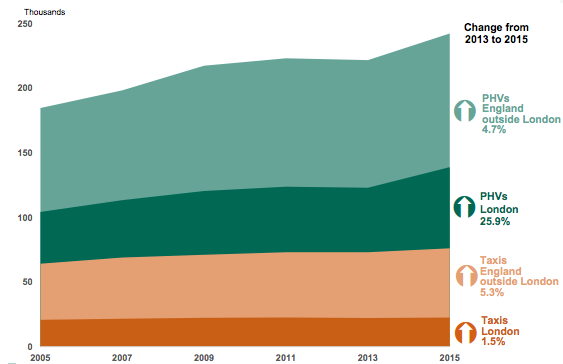 The TfD data also shows the number of licensed PHV operators shrinking, including within London — where the report notes a decline of 4.8 per cent to 3,000 operators. Which suggests an Uber-shaped impact on the PHV competition.

An Uber spokesman told TechCrunch it now has more than 15,000 “partners” (aka drivers who sell ride-sharing services via its platform) on its books in London. While, last October, CEO Travis Kalanick was reported saying the company expects to ramp up driver numbers in London to 42,000 by March 2016. He also claimed Uber had some 500,000 users in the Capital at that point.

Covering his comments at the time, the IBT also reported him saying: “In last month we have had 7,000 active drivers on the roads in London. For each of those cars on the road, you are taking seven and half cars off the road.” [emphasis mine]

It’s not the first time Uber has made specious claims about how its ride-sharing service ‘reduces traffic’. Kalanick’s maths here is particularly disingenuous — given the 7.5:1 ratio (presumably) assumes all Ubers are carpooling with full occupancy. And that if the people in the Ubers weren’t Ubering they would all be driving around in their own cars instead.

Which, in a city like London — with a comprehensive public transport infrastructure, and a congestion charging zone in central London that’s designed to disincentivize people from driving — is of course complete nonsense.

A DfT report on U.K. vehicle licensing notes that, as of the end of 2013, London had by far the lowest rate of per head car ownership in the U.K., with 307 cars owned per 1,000 people. While Transport for London (TfL) data for 2011/12 identified 2.6 million cars registered in London — versus an urban population of between 8.2 and 8.3 million at that time.

The TfL report noted that 54 per cent of London households had at least one car at that time — ergo close to a majority of homes had no car. Going a bit further back, the 2011 U.K. Census recorded an increase in the proportion of car-free households in Greater London — with car-less homes rising from 38 per cent to 42 per cent between 2001 and 2011.

All of which is to say that increasing numbers of Londoners don’t own a car, so are unlikely to be choosing between driving themselves or letting Uber drive them around. More likely they are choosing between getting the bus/train/cycling or getting an Uber. (Yes there are also car sharing schemes like Zipcar in London but it’s far quicker and easier to take public transport for most trips than booking, using and parking a shared car — and human transportation modus operandi generally follows the path of least resistance.)

So Kalanick’s claim that Uber reduces road traffic in London — when DfT data shows big jumps in the number of PHVs on London’s roads — rings pretty hollow, to say the least.

(Related: the city of New York is conducting a study into Uber’s impact on congestion.)

Nor is Uber merely supplanting existing London taxis, given that taxi numbers also increased (albeit marginally) over the period. You can say taxi numbers might have grown a little more if there was no Uber-shaped competition, but there’s no reason to think they would have swelled by a quarter, given the cost of taking a cab is higher than the cost of getting an Uber.

What seems closer to the truth is the (VC-subsidized) cost of taking an Uber is encouraging (some) Londoners to step away from public transport and get into one of its partner’s cars — a car which is only on the road in order to pick up paying passengers.

If there was no Uber, that ‘Uber partner’ would, in all probability, be doing something other than spending large amounts of their time driving around the city. While the cost-conscious Uber user would probably be taking public transport to get to where they need to go, rather than shelling out for a black cab ride. Remember: public transport in London is both plentiful and generally cheaper than getting any kind of taxi.

So if the number of fossil fuel burning vehicles for hire on London’s streets is increasing — and DfT data appears to suggest it is (unless there’s been a massively underreported influx of all-electric Teslas for private hire) — that growth must be having a negative impact on London’s air quality. And a portion of that foul air has to be associated with Uber.

Asked for comment on the impact of its business on air quality in dense urban centers like London, an Uber spokesman claimed that “the majority” of London “partner-drivers” on its platform drive hybrid cars.

There’s no doubt London has a serious problem when it comes to air quality. Last year the European Commission started legal action against the U.K. for breaching pollution targets, including in Greater London — specifically associated with nitrogen dioxide (a toxic byproduct of car engine and exhaust fumes combining with oxygen).

London is reported to have the highest levels of NO2 of any European capital city. London’s city authority website itself notes that “most” air pollution in London is caused by road transport and domestic, along with commercial heating systems, and recommends that businesses encourage employees to use public transport, walk or cycle to work.

“City-dwellers are particularly exposed, as most nitrogen dioxide originates in traffic fumes,” the EC noted in a press release detailing its legal action against the U.K., adding: “Nitrogen dioxide is the main pre-cursor for ground-level ozone causing major respiratory problems and leading to premature death.”

A study, published this July, of the health effects of NO2 and particulate matter pollution, commissioned by the Major of London and carried out by King’s College London using 2010 data, reported a higher health impact than previously estimated — including that there was the equivalent of 5,900 deaths associated with NO2 long term exposure in 2010.

If the huge health costs of traffic fumes in urban centers weren’t bad enough, the U.K. is facing EC fines of up to £300 million for breaching air quality standards.

What’s clear is that increasing the quantity of vehicles on London’s roads is not compatible with meeting European air quality standards — not unless the vehicles in question generate zero emissions.

On that front, it’s interesting to note that Uber has been linked to an interest in buying autonomous cars from electric car-maker Tesla in future. While Tesla’s CEO Elon Musk was asked (and declined to answer) whether his company might not itself offer ride-sharing services in future.

In the meanwhile, Londoners looking for a cleaner alternative to Uber might be interested to hear that an all-electric Tesla taxi startup soft-launched in the city last year. Called Gliide, the zero emission chauffeur service remains invite only at this stage.