Despite a growing number of direct-to-consumer brands, brick-and-mortar shopping still accounts for 94 percent of retail sales in the U.S.

That’s why Storefront, a startup that provides brands with temporary retail space, is launching RetailGrade, a new tool that makes reaching these offline shoppers a lot more straightforward.

Since launching in San Francisco in 2012, Storefront has helped over 2,000 brands, from Nike to up-and-coming designers, open temporary retail stores that run from a one day to one year. Currently available in San Francisco, Los Angeles, New York, and Chicago, the company is growing its customer base by nearly 20 percent monthly, co-founder Erik Eliason reports.

However, it’s still a risk for many online brands to put up the cash for an offline store. Prior to launching RetailGrade, Storefront would provide details about and photos of the available space, but the burden of researching the neighborhood and estimating potential foot traffic fell primarily on the renter.

“Today the photos do help to get an idea of the space, but most people will also look at Google Maps to get an understanding of the street or the neighborhood,” Eliason says. “A lot of folks will even visit the store first, because in retail each street (and each section of the street) really matters.” 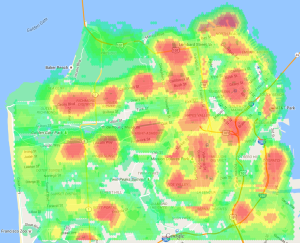 The algorithm behind RetailGrade takes into account a variety of data points, including population density, nearby shopping and entertainment options, and the performance of existing retail stores. It then determines the level of “foot traffic with purchase intent” for over 1.1 million retail locations across the country, and provides a retail attractiveness score that ranges from 1 to 100.

Any business owner can now use RetailGrade to scope out new real estate, but the tool should be especially useful for temporary renters that need to get the best bang for their buck. With the ability to more accurately estimate foot traffic and sales revenue, small brands are less likely to lose money on an unsuccessful pop-up shop.

Storefront has raised nearly $9 million in venture funding from Spark Capital, 500 Startups, and others. The company plans to launch in a few new cities in the fourth quarter of 2015, and will continue to roll out additional tools for renters in the meantime.