There are plenty of things that I don’t like One of them is waiting. For just about anything. I’m not alone. The airport is one of those places where hours upon hours can disappear…just while waiting.

A company called BLIP Systems wants to let us know where we stand, while we stand, at the airport (most notably, JFK in NYC). Sounds good to me. But the way that they’re doing it is the real interesting part. The company has unleashed a bunch of sensors, or “BlipTracks” around the airport, that check for Wi-Fi and Bluetooth signals from cellphones in “discoverable” mode (not creepy since it’s just collecting anonymous MAC addresses for algorithmic purposes).

So in a way, BLIP Systems is harnessing the folks waiting to figure out just how long they’ll have to wait. I dig it. The screens showing calculations of wait times are familiar looking, as some of us are lucky enough to have those on our highways. It’s pretty helpful (and calming) to know what’s going on ahead of you.

The CEO of the company that runs JFK’s most clogged terminals, Gert-Jan de Graaff of JFKIAT, had this to say about the technology:

We’re probably reaching 19.5 million passengers this year in total. It’s a big operation, which is why we’re introducing innovations to enhance the operations of the building. This new system will help us manage and eliminate problem spots within the facility, and sharing the processing time with our travelers will provide them with peace of mind so they may continue to expect a pleasant travel experience. Additionally, data from travelers’ phones could eventually influence future airport design. 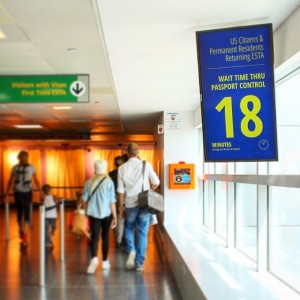 The really interesting bit to me comes at the end of that statement, where Graaff says the data that they’re collecting could influence future airport design. Using data to streamline any process is en vogue, so it makes complete sense to apply that same thought process to physical design. The airport could learn about a specific area that bottlenecks and they could, for example, throw out the trash cans that everyone stops at, thus slowing down the line.

This isn’t the first time that places have taken a crack at doing things like this. Before this technology was put into place, JFK used a mix of cameras and stopwatches to manually track how long people had to wait in lines. Ugh, how 2005.

In addition to JFK, BLIP Systems is tracking wait times in Cincinnati, Toronto, Dublin, Amsterdam, Barcelona, Manchester, Dubai, Auckland, Oslo, Helsinki, Milano, Brussels, and Copenhagen airports. The technology is also being used on the road in a few countries, a scenario that I mentioned earlier. 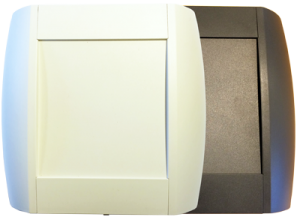 The sensors themselves track patterns in all kinds of “traffic” situations based on the activity of our cell phones, and the company says they don’t need any maintenance, making the technology almost hidden. Although, I imagine if one, or a few of, the sensors breaks then it’ll send all of the data into a crappy chain reaction of false positives.

If this kind of thing shaves a few minutes off of the time we have to wait, or at least be accurate enough to let us know what we’re getting into, then this is a total win for everyone involved.

Data-driven decisions are being made everywhere, now in the physical space thanks to technology…and our always active cell phones.