At a news conference on Monday, police in Canada revealed that Avid Life Media, the company that operates the Ashley Madison website, is now offering a $500,000 reward (CAD) to anyone providing information that leads to the identification and subsequent arrest of those involved in the large-scale hack that revealed the personal information, including names, emails, phone numbers and transactions from the online site dedicated to extramarital affairs. In addition, the police said that the hack is now linked to two unconfirmed suicide cases involving Ashley Madison users.

In a statement, acting staff superintendent Bryce Evans of the Toronto Police appealed to the hacking community, “who engage in discussions on the dark web and who no doubt have information that could assist this investigation.” Additionally, he asked the hacking community to “do the right thing” with regard to the unique situation which Evans said has “enormous social and economic fallout.”

“You know The Impact Team has crossed the line,” Evans stated, while asking for informants to reach out to the police with further details on the hack.

The Impact Team, of course, is the group behind the Ashley Madison hack, which involved a sizable data dump that revealed the names of those who held accounts and transacted on the website whose tagline is “Life is short. Have an affair.”

Avid Life Media, the company behind Ashley Madison, confirmed the hack but said earlier this month that the data didn’t include full credit card numbers. However, in Evans’ statement today, he noted that credit card data was included in the original data dump, but investigators believe it’s limited to the last four digits of users’ card numbers.

He suggested that potential victims should keep an eye on their accounts as a precaution.

The hack, which was first revealed in July, wasn’t only embarrassing personally and professionally to those affected – according to the Toronto Police, it has also been linked to two unconfirmed suicides. Evans didn’t reveal any further details about the suicides at the conference, but it’s not surprising that this sort of worst-case-scenario has resulted as fallout from the data breach. Evans also noted that some hate crimes may connected to the data breach as well.

Over 30 million members have seen their information revealed in the hack, and the police also warned that victims may now also encounter spin-off scams – which is when other hackers use their information to dupe them further, such as by claiming to provide access to leaked websites, the police said. The public was warned not to click on links as that could expose their computers to “malware, spyware, adware and viruses.” Other scam websites are offering to erase info from the database for a fee, Evans warned, and some are even trying to extort money from victims by threatening to release their information unless payment is received. 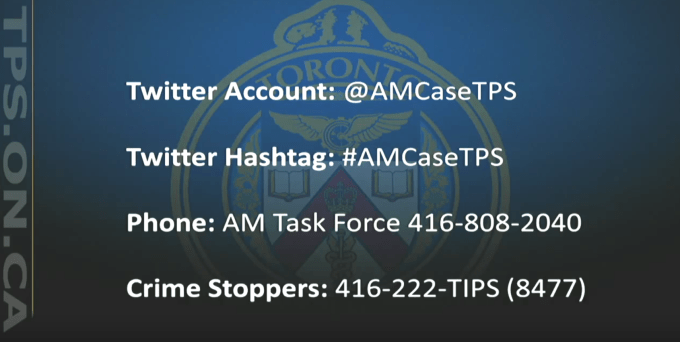 In terms of the reward, Evens confirmed that Avid Life Media is offering $500,000 to anyone “providing information that leads to the identification, arrest and prosecution of the person or persons responsible for the leak of the Ashley Madison database.” In U.S. dollars, that’s around $380,000. People are asked to contact police directly.

At the news conference, a representative from the U.S. Dept. of Homeland Security also confirmed that the Toronto police requested for them to come in and assist with the investigation, but that the FBI was investigating the network intrusion aspect to the hack.

While reports to date have indicated that a lack of security may have permitted the hack on Ashley Madison, when questioned about the nature of the hack itself, Detective John Menard of Toronto Police’s Technological Crime Unit said, “generally, it’s very sophisticated.” He would not disclose details on how it took place, whether it was an individual or team, or whether it was internal or external to the company, citing the ongoing investigation.

UPDATE, 8/24/15, 4:30 PM ET: ALM has released a statement regarding their efforts with law enforcement:

Toronto, ON, August 24, 2015 – Avid Life Media Inc. is grateful to the international law enforcement coalition for the update it provided this morning. We are confident that the considerable investigative and prosecutorial power that is being brought to bear on this unprecedented crime will lead to arrests and convictions.

The “Project Unicorn” law enforcement task force members that appeared in Toronto today, led by the Toronto Police Services (TPS), and accompanied by the U.S. Department of Homeland Security, the Ontario Provincial Police, the Royal Canadian Mounted Police, and the U.S. Federal Bureau of Investigation, have been actively investigating all aspects of this crime for more than a month. As TPS indicated at today’s press event, the investigation is progressing in a “positive direction,” but more help is needed from the outside.

As such, and as announced at today’s press conference, Avid Life Media Inc. is offering a $500,000 CDN reward payment to anyone who provides information to the Task Force that leads to the identification, arrest, and conviction of the person or persons responsible for the theft of proprietary data.

In the very best interest of our customers, who have been affected by this malicious act, we are firmly committed to fully assisting these law enforcement and investigative authorities, without reserve. Because of this active and ongoing investigation, there is little more we can provide at this time to the media and the public.

Update, 8/28/15: ALM said the original phone number provided in the statement was incorrect. Instead of 416-418-2040, the correct number is 416-808-2040. The post has been updated with the correct phone number in the pasted statement, though the slide still displays the old one.