Uber isn’t happy with its competitors in China. The U.S. ride-sharing Goliath has “spoken out for the first time” about being blocked on WeChat, China’s hugely popular mobile messaging platform which is run by Tencent, an investor in Uber rival Didi Kuaidi.

Emil Michael, the Uber exec who found himself in hot water after making comments about journalists last year, lamented the freezing of Uber’s WeChat account to Bloomberg. Uber had a range of accounts set up on WeChat — which is arguably more important for customer relations in China than a Facebook Page is in the West — but things began to change following the billion dollar merger between Didi Dache and Kuaidi Dache in February.

“From then on is when you start to see a deterioration in the competitive environment, and it hit a crescendo where our [WeChat] accounts actually got shut off in March,” Michael said to Bloomberg.

We contacted Uber and Tencent for comment, but neither company provided a response. (We’ll update if and when they do.)

The first sign of a block did indeed come in March of this year, when Uber’s official account was removed, apparently due to violating rules. WeChat then reportedly scrubbed out all mentions of Uber from the service’s search feature in July to further hide the service from users. Couple this with a recent investment in Didi Kuaidi from China’s sovereign wealth fund, and you have all the ingredients for Tech Outrage. 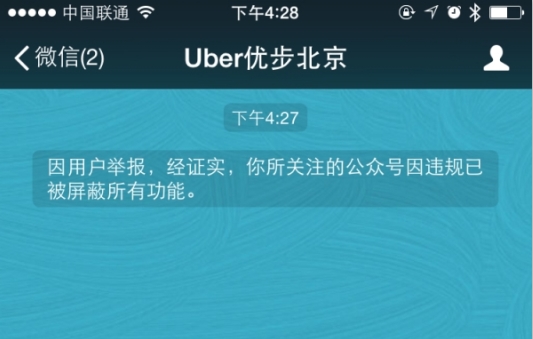 Even though Uber claims over a million rides per day in China, which it said will overtake its U.S. business, the company believes the WeChat block is curtailing its potential. It’s easy to see how this situation frustrates Uber — which, by the way, is currently raising funding for its China business; Bloomberg said Michael is leading that charge — since WeChat has such a huge following in China, where the majority of its 500 million-plus active users are thought to be based.

But let’s not feign surprise. This is life on the internet, and life in China.

Tencent uses WeChat to further a lot of its goals. For example, JD.com — the rival to Alibaba that Tencent invested in — is integrated with the service to allow WeChat users to place orders from inside the app. Didi Dache and Kuaidi Dache’s services still exist separately despite the merger, and the former is also baked into WeChat so you can order a taxi in seconds without ever leaving the app.

Tencent has also, to its credit, added lots of other utility and convenience-centric services to WeChat, so you can pay your bills and do other daily tasks more easily. But, on the business side, its investors would be concerned if the service was managed in such a way that rivals were profiting from it at their own expense.

My Platform, My Rules

Uber should know better. When you use someone else’s platform, you’re subject to their rules and, at times, their decisions.

It wasn’t so long ago that Facebook would cut access to its platform for a range of social services that competed with it some way, shape or form. Heck, Twitter stills does it, as the team at Meerkat, a rival to Twitter’s Periscope live-streaming app, can attest to.

What makes Uber feel this situation is so different?

Maybe, as I wrote last year, it’s the arrogance that comes with being a $40 billion company frequently referred to as disruptive.

Uber is used to knocking down barriers as part of its determined push to change the world (using its vision of what’s best) — but all too often that rampant enthusiasm manifests itself in ugly scenarios, such as Michael’s comments about media, the tracking of users and other things that bubbled up last year when I argued that the company’s moral compass was corrupted and in need of a reset.

In this case, Uber isn’t harming anyone, but it looks foolish and desperate… and perhaps even hypocritical, too.

Uber has its own power relationship in China, courtesy of search giant Baidu which made a strategic investment in the U.S. firm in early 2015.

One of the fruits of that coming-together is that Uber is the taxi-app of choice in Baidu Maps, China’s largest consumer maps app, while Uber enjoys prime positioning within other Baidu services, which include China’s top search engine.

The maps arrangement is similar to that which Uber enjoys with Google in the West — is that really all that different to Tencent’s position on WeChat? 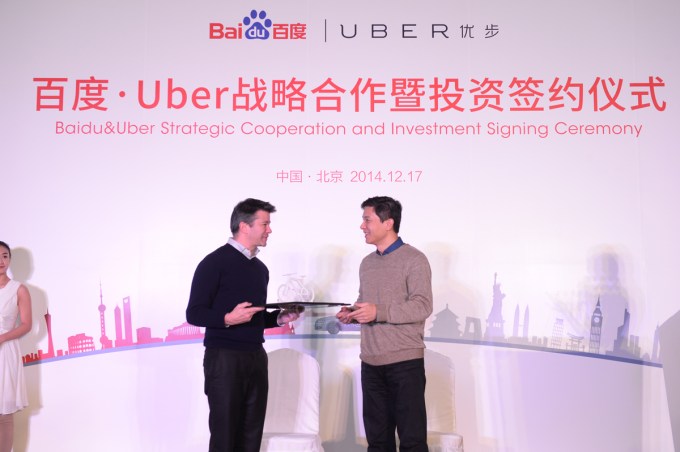 Either way, Michael said he believes that Tencent will change its tune once it becomes apparent that Uber isn’t going anywhere.

“I think as we continue to succeed, and it’s clear we’re in this for the long haul — we’ve got Chinese investors behind us; we’ve got partnerships with cities; we’re spending money in the local economy; local investors have an interest in our success — then we’ll get into more of a détente mode,” he told Bloomberg.

Beyond the issues at hand, Michael’s comments falsely paint Uber as a total outsider in China. That’s convenient in this case, where things don’t suit, but it does a disservice to the company’s localization efforts which — despite some arguments otherwise — are actually impressive in China and across Asia. Yes, Uber is an American company, but it has adapted to local markets in a far better manner than the latest running of Emil Michael’s mouth would have you believe.