WeChat dominates China with its messaging hub that lets you shop, call a taxi, and pay bills — all from one app. Now, mobile search startup Vurb wants to bring the monolithic app style to the United States with the help of Tencent, WeChat’s developer which has secretly been an investor in Vurb’s $10 million of funding.

Step 1 happens today with the launch of a chat feature in Vurb. 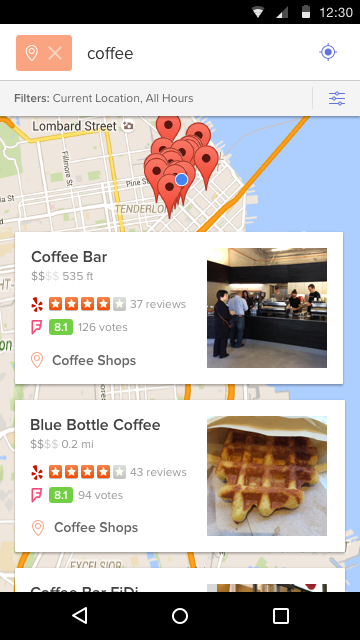 Vurb is launching openly on Android today and no longer requires waitlisting on iOS. It normally allows you to browse or search through cards of nearby restaurants, movies, and more that pull in extra info like Yelp and Foursquare reviews, or Rotten Tomatoes scores and IMDB data. Now you can plan a night out easier by sharing those cards with friends through Vurb’s new internal messaging feature. No need to bounce over to SMS or use the clumsy iOS share sheets.

But what’s perhaps more interesting is the opportunity this primes for Vurb. In China, rather than every little business or utility getting its own app, they create “official accounts” on WeChat. These work similar to connecting with a new friend to talk, but instead offer unique functionality like ecommerce that taps into WeChat’s mobile payments wallet.

Vurb’s founder Bobby Lo tells me that’s the direction his app is going. Eventually, businesses could build official accounts into Vurb so people could order their movie tickets, book reservations, and more without leaving the app.

“There are too many apps. 1.5 million of them. 25% are never opened. There are things that shouldn’t be apps. They’re one-time-use functions.” Lo tells me. He says WeChat has proven the power of microapps inside a messaging hub, so “Why is there no U.S. version?”

Vurb got started in 2011 and raised $2 million in 2013. At the time it didn’t reveal that Tencent was an investor, but now it’s saying the Chinese tech giant was in the round alongside CRV, Data Collective, CrunchFund [Disclosure: It’s run by TechCrunch’s founder], and angels like Drew Houston and Naval Ravikant. Its ambitious approach to stealing mobile search from Google won it the TechCrunch Disrupt NY 2014 Battlefield Grand Prize. 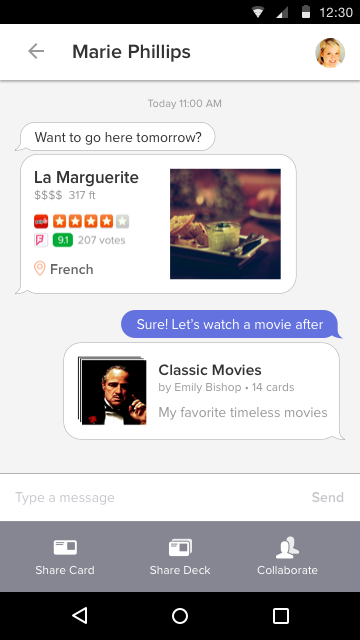 Next it raised $8 million more in a Series A led by Redpoint, and joined by Tencent and its previous investors. Vurb launched on iOS with a waitlist in February 2015 and was named a “Best New App” by Apple…who probably doesn’t mind it competing with Google.

Vurb won’t disclose its user count beyond saying it has double-digit month over month growth. It hasn’t done too well according to App Annie, hovering around #175 amongst iOS social networking apps. But in-app messaging has been shown to boost retention, so adding the feature could help Vurb with growth.

Now when users find an interesting card, they can just swipe left or hit a share button to instantly see a list of friends they can send it to. If that friend doesn’t have Vurb, they’ll receive the card as an image via SMS. You can see a walk-through of using Vurb chat to plan an outing with friends without jumping back and forth between apps in the video above.

Eventually, though, you could imagine messaging a hotel concierge to book excursions, or local restaurant to order takeout. The question will be whether users in the west actually want monolithic apps. Tencent is hedging its bets. Besides Vurb, Tencent also just put $50 million into messaging app Kik, which is focusing on media content like a music services and helping users meet new people. Vurb is more focused on utility.

How much of messaging does Vurb want to subsume? “It’d be great if it was all of it” Lo says with a laugh. “While there are a ton of messaging apps today around text, photos, and video, there’s still no great way to communicate things — places or intents” he explains.

But I suspect the company may try to partner with big messaging apps like Facebook Messenger and its investor’s favorite child WeChat. This way, when you want to just chat about whatever, you use your normal messaging app, but when you want to plan something with friends, you use Vurb but the messages are transmitted by your main messaging app. Otherwise, Vurb might need to build some kind of mobile wallet integration to power future commerce. 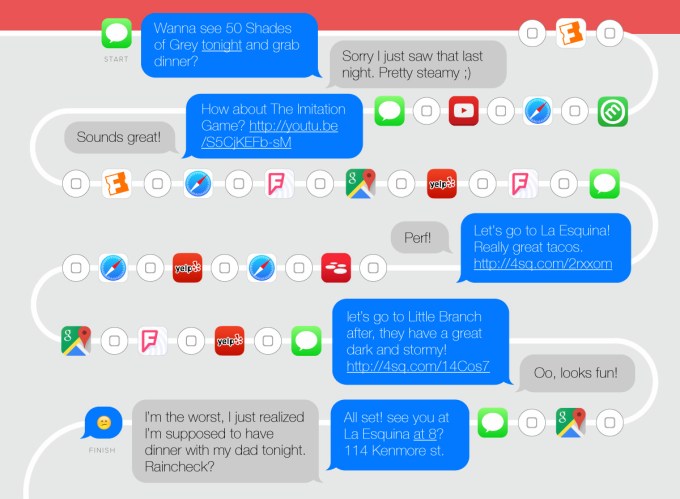 Until now, the U.S. apps like Facebook have neglected the monolithic app format, and instead create constellations of related apps. But this “unbundling” has led us to the current predicament, where you have to have dozens more apps on your phone than you usually need, and jumping between them is a pain.

Lo concludes “We’re totally sick of downloading apps. The time is ripe for disruption in the mobile space. We know app constellations don’t really work. At least at Vurb we’re moving in the direction towards solving this app silliness and discovery problem.”