I am notorious for losing things amongst my friends, so when Tile launched its successful 2013 Selfstarter campaign (which went on to raise $2.6 million) for its lost item bluetooth tracker, I was quick to check out the device. I wasn’t really convinced then based on its limited functionality, but after trying out this new version I’ve been won over.

The killer feature that was just announced is the Find Your Phone tool. It’s basically a hardware shortcut to the app’s own version of iOS’s Find My iPhone feature. But here, you just double tap the “e” on your Tile and if your phone is within bluetooth range of the tag (around 100 feet), it’ll start ringing. In short, now Tile really is the perfect keychain companion. 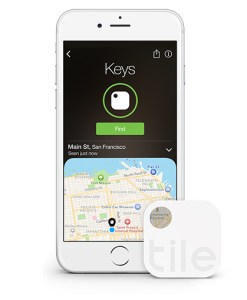 My phone is probably my most frequently misplaced item and going through the hassle of finding it with Find My iPhone when I know that it’s somewhere in my apartment has been a little frustrating, especially when I’m rushing out the door. The two-way communication now offered by Tile, basically gives you a way to find two devices with one tag, given that you haven’t lost both of them that is.

Another issue with the original Tile was that it’s alert ring was just too quiet, especially when the keys I was searching for were stuck muffled by couch cushions. The new Tile has heightened its ring volume to 90 decibels, which makes the item the tag is affixed to much easier to find.

The Tile still feels a little bulky. I wish that in its second version it had reduced its footprint a bit to make it easier to, say, put in the credit card slot of a wallet, but it’s just not all that comfortable of a fit right now.

The second iteration of Tile offers some key improvements over its predecessor and while I probably can’t attach a Tile to everything in my life, I’m a little more confident that I won’t be losing my keys and phone quite as much thanks to it.