Good sound never goes out of style, and in the audio world tradition is a uniquely strong credo.

In keeping with that thought, I’m currently leaning back in an Eames Lounge Chair dialing in on a copy of the Citizen Kane of headphone-listening albums, The Dark Side Of The Moon Remastered.

I’m listening to this classic album with Grado’s latest pair of limited-edition cans, the first model in their Heritage Series line. These Grado GH1 headphones may be brand new, but they are every bit classic Grado.

The maple wood-bodied GH1s have a fresh look but the same great sound, albeit a different flavor of it. The company bills these limited-release headphones as their first pair made from a Brooklyn tree. They sit on the higher-end of Grado’s line at $650. They’re pretty awesome.

These headphones sound stellar, pure and simple, yet they aren’t suited for everybody.

Open-ear headphones adopt their own brand of lifestyle. The structure of the headphone leaks a ton of noise, which doesn’t make them ideal for spaces where tranquility is the soul of wit. You hear pretty much everything that’s happening around you due to the headphones’ design so these definitely aren’t the ones I’d bring on a plane.

Fans of Grado’s sound are unlikely to be surprised by any of this, and this is clearly a headphone built for the brand’s devotees.

“The [GH1s] are just a different flavor of the Grado sound,” CEO John Grado told me. “You might like vanilla ice cream, but you like Ben and Jerry’s. I like Haagen Dazs. It’s still vanilla but they’re just a little different.”

The Grado GH1’s are anything but vanilla.

What stand out about open-ear headphones are the fullness of sound that they bring. The music never really felt contained by the body of the headphones because the open-ear nature placed them in the context of the environment I was in.

Grados generally dominate on the mid-range and the GH1s are no exception. The crazy chord progressions on DSotM’s “Any Colour You Like” were dynamic as all hell and I could feel the difference in my bones when I cranked the GH1s to high volume.

The sound felt a little less encompassing when listening to more bass-reliant tracks, but with these headphones there are always moments of brilliance. A few songs on a more modern choice, Dr. Dre’s “Compton,” felt a little flatter then I’d like, but the vocals always popped through with a vigorous intensity. 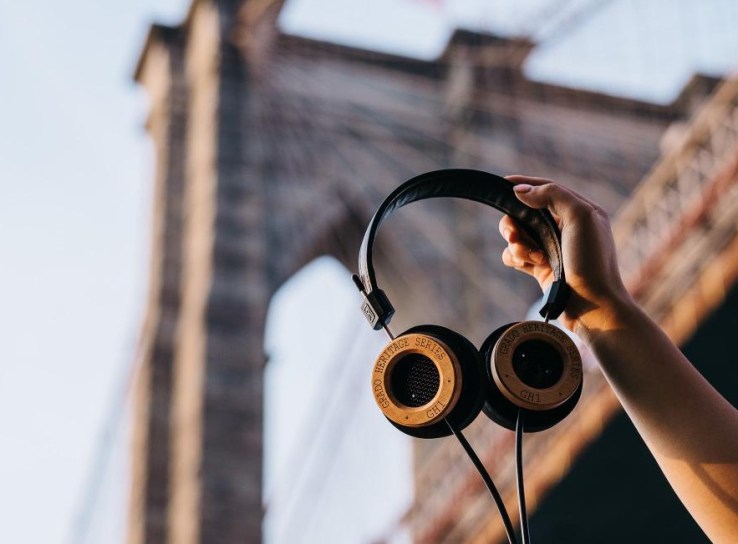 John Grado is a working class-style Italian dude who appreciates laying out a good backstory.

“We’re an old-style Italian family that’s kind of big on tradition,” he prefaced as I asked him about what makes the GH1’s unique. From there he launched into a history of Grado Labs, Inc, a company housed in a building that his grandfather Joseph bought in 1918. 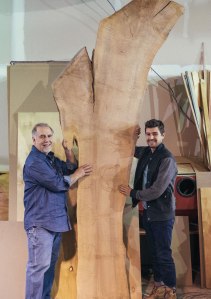 CEO John Grado, left, with his son Jonathan Grado, VP of Marketing, and the Brooklyn tree that the GH1’s housings are carved from.

By the 1950s, Joseph was beginning to build and sell phono cartridges that were highly respected for their quality. In 1965, a 12-year-old John came to work in the shop sweeping the floors of the factory.

From there, John Grado’s Brooklyn accent guided me through the introduction of their headphone line in 1989, the acoustic stability of wood-bodied headphones and the unique opportunities to experiment that Grado Labs is afforded in being a small family-owned business.

“Before we started making the wood headphones, I woke up in the middle of the night and thought to myself, ‘Let’s try wood.'” he recalled. “That day, I came downstairs and we made a couple housings out of wood. I listened, but didn’t think it was the right wood so, you know, we just kept playing with it.”

Grado has now been making high-end headphones with wood housings for nearly twenty years. The GH1s are not only continuing that tradition but are showing off the family roots a bit more as this model’s housing is carved from a tree from Sunset Park neighborhood in Brooklyn.

The first thing you’ll notice when you take the GH1’s out of their no-frills packaging is how freaking light they are. Seriously, the body of the headphones weighs about as much as the heavy-duty non-removable cord. 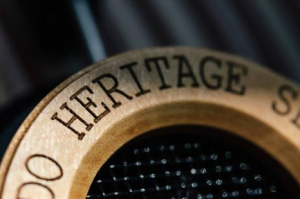 Nevertheless, I think that people used to really solid build qualities on other $500+ headphones might be a little disappointed with the build of the GH1s.

Grado launched their first headphone line 25 years ago and have since made very few cosmetic changes, other than a couple evolutions in housing materials. The Brooklyn-made headphones are pretty solid, but I still feel a little wary throwing them in my backpack without a case.

The padded leather headband is comfortable and it doesn’t take all that long for the stiff ear pads to wear in, but other than the beautiful maple housings, I wasn’t really left feeling like I was putting on a pair of $650 headphones until I actually gave them a listen.

At $650, the GH1s are definitely an investment, but anyone with a pair of Grado’s RS1s or SR325’s will tell you that higher-end Grado headphones are unlike any other model on the market. They look tight even though the build leaves a bit to be desired, but tradition comes with its quirks.