When I first got the job running marketing at Mint, founder and CEO Aaron Patzer told me that we had to get Mint to 100,000 users within six months of launching.

The number itself didn’t intimidate me: Before Mint, I had been Facebook employee No. 30. I’d witnessed crazy, exponential user growth first-hand. The difference was that at Mint, we were pre-product and certainly pre-repeatable-growth-engine. That meant we had to invent something from scratch.

I won’t lie, I was nervous. I started by drawing up a marketing plan.

In the startup world, where growth is as essential to life as oxygen, falling short of your growth goals means your company dies.

Given the life-or-death importance of achieving growth, it’s ironic that growth teams, marketers and founders often treat it as a matter of faith. Their execution plans amount to working really hard, then dropping on their knees to pray to the growth gods that everything will magically work.

The mistake you’re making is a simple but profound fix, and it’ll fundamentally change the way you approach growth.

Growth isn’t modeled and achieved by assuming growth. That sounds obvious, yet assuming growth is what 99 percent of entrepreneurs are still doing today.

My friend Andrew Chen, in his awesome article, “The most common mistake when forecasting growth for new products (and how to fix it)”, said the No. 1 mistake he sees in growth forecasts is that they look like this:

Does that look familiar? Be honest.

This kind of model is an exercise in vanity, because it makes you feel like a billion-dollar valuation is just one tiny tweak away to that growth-rate cell on your spreadsheet.

That process of deriving the growth rate is what creates an actual plan you can execute.

That’s the catch. In life, we don’t get to choose our growth rate. We can only choose what we put into our work, and the growth rate emerges from the other end as an output of what we’ve done.

In Andrew’s words, when you’re creating your model, “rather than assuming a growth rate, the focus should be deriving the growth rate.”

That process of deriving the growth rate is what creates an actual plan you can execute. I’ll tell you how.

Start With Your Most Important Number

If I learned one thing from Mark Zuckerberg at Facebook, it was that you must only focus on one, most important thing at a time. He schooled me in this lesson one time in particular that I’ll never forget.

Back in 2005, I would bring all kinds of new ideas and different product features to Mark.

Way back then, if you can remember, people thought that Facebook was a cool app, but no one thought that it could become a real business. That bothered me, and I was always concerned that we weren’t making enough money and that people thought we couldn’t do it.

That’s what paved the way for my genius idea: prove the skeptics wrong, make money at Facebook and be a “real” business that made serious profit.

Mark listened to my idea, then on the whiteboard he wrote the word “GROWTH.” He proclaimed he would not entertain ANY idea unless it helped Facebook grow by its total number of users.

I really began to appreciate that lesson when I ran my own company, AppSumo. Here’s what our company dashboard used to look like:

It was filled with distractions. We couldn’t say no to different ideas, because we had so many numbers we were trying to improve that we ended up improving none at all.

Worst yet, if you went around the room and asked AppSumo employees what our company goal was, everyone would say something different. Let that sink in for a second. That’s an embarrassing thought.

In January of the following year, we set our goal for the year to getting 3,333 customers for our new course that helped 3,333 people create their own $1,000-a month business. We created a new dashboard that looked like this: 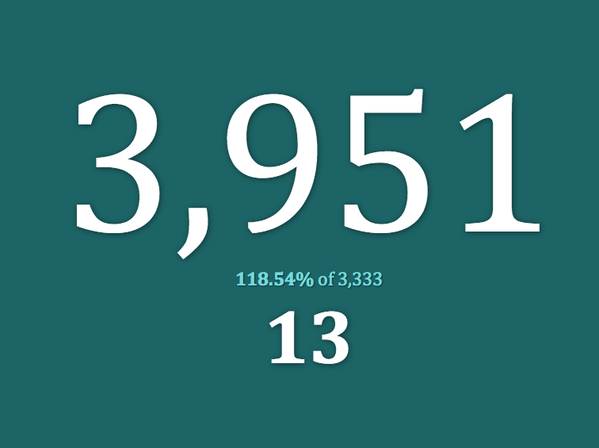 This was a sincere thing we wanted to accomplish, and the whole team clearly knew the designation of where we wanted to go this year. We hit our goal by October and polished off a few tacos in celebration.

That’s why to make a plan for growth, your first step is to choose your one, most important metric, and reverse-engineer what you need to do to get there.

How To Meet, Then Exceed Your Goal

Now that we know our goal, we’re going to work backwards to the solution we need.

We’re not going to do “social media marketing” and flail around with random blog posts published anywhere on the web, because we know that won’t get us to our goal.

Here’s what we do, with an example from Mint:

If you’re thinking that this is stupidly simple, it is. That’s what makes it so powerful.

We’re getting to the 100,000-user total with reasonable estimates on the inputs into our system. We’re going backwards from our user goal, to the conversion rates and CTRs we need, to the traffic that’s expected to the different sources.

Now we know what we need to do — this is our plan to execute.

There are two columns: total users and confirmed users. You must confirm the marketing ahead of time: blogs, tweets, ad buys, etc. Don’t leave it up to chance. Only confirmed matters.

Set up your metrics on the pre-launch like above, then confirm the marketing channels. As you go, reconcile your estimates with what actually happens. Track with the Google Spreadsheet to know what’s working and what’s not. That will tell you how you’ll need to adjust your plan.

If you do this, you’ll go from hoping and praying to actually thinking through what you need to do and having a roadmap that can guide you to where you need to go.