Over the past six years, FindTheBest has been rolling out search and comparison shopping tools (18 in all) to cover everything from companies to schools to gadgets to real estate. At this point, founder and CEO Kevin O’Connor said that calling the company FindTheBest no longer makes sense — so it’s rebranding as Graphiq.

O’Connor, who previously co-founded DoubleClick (acquired by Google for $3.1 billion and now a major part of its ad platform), said he’s been hinting at the broader vision for a while — after all, he’s talked about how the company’s different datasets have become increasingly interconnected.

In his words, the team ended up building “the world’s largest knowledge graph.” More concretely, the company says it has created a database of 1 billion entities, describing them with 120 billion attributes and connecting them via 25 billion relationships. For example, the knowledge graph contains a long list of data points about Harvard University, including admission rates, SAT scores and tuition.

On some level, that seems obvious — you’d need that kind of information to do what FindTheBest already does. But by gradually building up the data as FindTheBest expanded subject-by-subject, Vice President of Engineering Ivan Bercovich said the company has succeeded where other attempts at creating a knowledge graph have failed. Particularly important are the relationships between different data points. The company not only has information about home prices, but it can then combine that with data from other categories, like schools and health.

“The vertical search engine was the first manifestation of what we could do with this knowledge graph,” O’Connor said.

Moving forward, Graphiq will continue to operate FindTheBest and other sites like FindTheData and SoftwareInsider. But it’s also launching a new set of products that allow online newsrooms to create infographics and other visualizations. 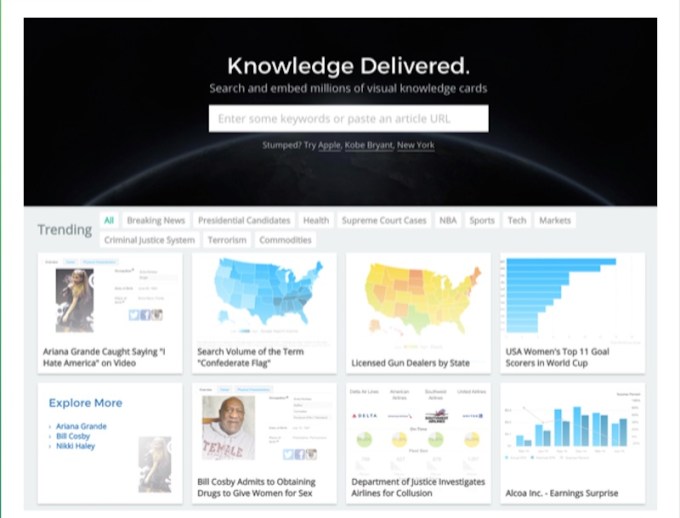 Those products include Graphiq Search, where journalists can — you guessed it — search through the company’s existing visualizations and create new ones from Graphiq data; a Graphiq Feed with news alerts and research; and Graphiq Plugins, starting with integrations for WordPress and WordPress VIP, which automatically recommend visualizations that may be relevant for a given story.

While there are other visualization companies out there, such as Visually, the real selling point is the data that Graphiq is drawing on. It allows publishers to create graphics in a wide range of topics, from U.S. airstrikes to baby names to executive salaries. (To support the needs of newsrooms, Vice President of Distribution Alex Rosenberg said the company had to flesh out some areas where it was weak, like celebrity data.)

You might think that Graphiq is turning to those publishers as a new revenue source — but that doesn’t appear to be the case, at least not yet. Instead, Rosenberg said Graphiq is providing its tools for free.

“Newspapers have been in business for hundreds of years and they’ve built up huge audiences, but they’re struggling with the transition to digital,” he said. “A lot of the problems they’re encountering are not editorial problems, they’re technology and business problems. We have the opposite problem — we’re really good at technology, but we need new ways to reach audiences.”

So publishers get free, easy-to-generate content, while Graphiq can increase consumer awareness and drive traffic to its different search sites. At the same time, Rosenberg said he’s open to the possibility of charging for additional features like removing the Graphiq branding or giving one publisher early/exclusive use of a specific infographic.

And yes, O’Connor has plans for more Graphiq products.

“We want to get knowledge delivered to people who need it,” O’Connor said. “We’ve got two or three other really huge ideas that we’re working on that we think that could be useful across the Internet. Who doesn’t need knowledge?”