With Edge in Windows 10, Microsoft has finally delivered a capable browser to replace the aging Internet Explorer. Microsoft likes Windows 10 so much, it makes Edge the default browser in Windows 10, even when you’re updating from a system that previously used Chrome or Firefox as the default.

Unsurprisingly, Mozilla is not amused and its CEO Chris Beard today wrote an open letter to Microsoft CEO Satya Nadella to complain that the company is taking away its users’ choices and ignored Mozilla’s calls for keeping the default during the upgrade process.

“When we first saw the Windows 10 upgrade experience that strips users of their choice by effectively overriding existing user preferences for the Web browser and other apps, we reached out to your team to discuss this issue,” Beard writes. “Unfortunately, it didn’t result in any meaningful progress, hence this letter.

“Sometimes we see great progress, where consumer products respect individuals and their choices. However, with the launch of Windows 10 we are deeply disappointed to see Microsoft take such a dramatic step backwards.” Mozilla CEO Chris Beard


To once again make Chrome or Firefox your default, you have to open your browser of choice and go through a few steps to tell Windows 10 about your choice. You can’t just click “Use Firefox as my default browser” and that’s that. All that button will do is open up the Windows 10 default settings. For non-technical users, the procedure isn’t exactly self-explanatory. 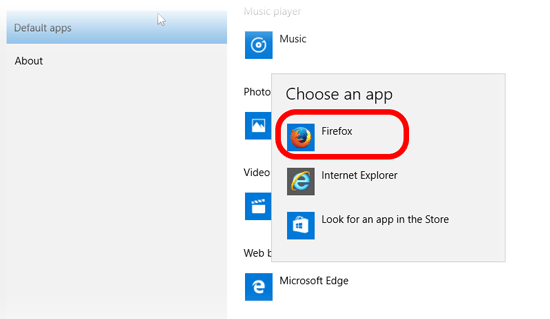 “While it is technically possible for people to preserve their previous settings and defaults, the design of the new Windows 10 upgrade experience and user interface does not make this obvious nor easy,” Beard writes.

So to help users restore their defaults after upgrading to Windows 10, Mozilla has put together a step-by-step tutorial and video (which isn’t riveting but does the trick).

Beard, who calls this an “aggressive move,” urges Microsoft to change its business tactics. “These changes aren’t unsettling to us because we’re the organization that makes Firefox,” he writes. “They are unsettling because there are millions of users who love Windows and who are having their choices ignored, and the increased complexity put into everyone’s way if and when they choose to make a choice different than what Microsoft prefers.”

Mozilla, though, it’s worth noting, also had a few issues lately. Its users were neither happy with its switch to Yahoo as the default search engine, nor with the integration of a WebRTC-based video chat tool and Pocket.

When we asked Microsoft for a comment, we received the following from a company spokesperson: “We designed Windows 10 to provide a simple upgrade experience for users and a cohesive experience following the upgrade. During the upgrade, consumers have the choice to set defaults, including for web browsing. Following the upgrade, they can easily choose the default browser of their choice.  As with all aspects of the product, we have designed Windows 10 as a service; if we learn from user experience that there are ways to make improvements, we will do so.”