Activity apps are all the rage right now thanks in part to any number of smartwatches and bands you can wear, as well as Apple’s HealthKit initiative. There’s a lot of activity going on out there, and we’re finally tracking the data that goes along with it.

With that data comes some interesting learnings. A company called Human, which has a fitness tracker for iOS that begs you to spend at least 30 minutes active every day, is sharing some of that data (in an anonymized way of course).

Thanks to all of the activity data that its users are sending back to them, they can plot out the movement of the globe, almost in real-time for 900 cities. Want to know how active your city is versus the rest of the world? No problem: 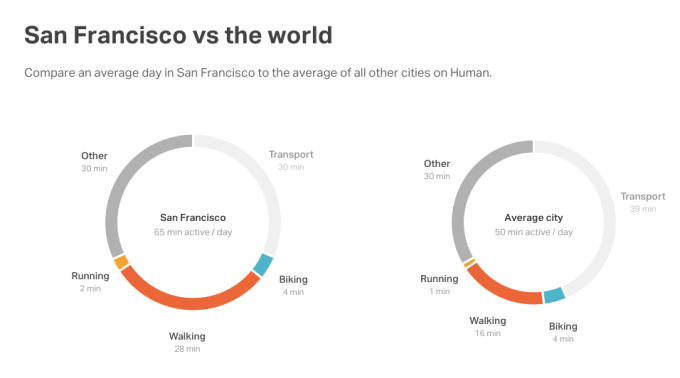 According to its community, the most active city on the platform over the past few days has been Berlin. Having spent some time there, I can attest to the activeness of the city. Everyone pretty much walks everywhere. 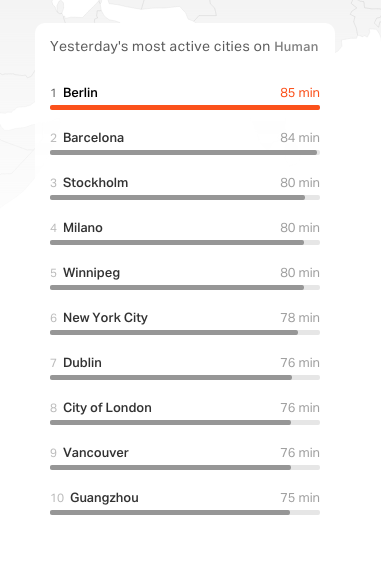 Now does this make you want to be more active? Maybe not, but it’s a cool way to see how companies can compile all of the bits they’re collecting from our random activities and make them readable in a way that can steal a half hour of your time.

Foursquare used to be really good at doing this, but they’ve stopped. Mind you, they weren’t tracking all of your moves, but they had a good idea of where you were.

Sure, to get even better data, Human needs as many users it can get, but with the 3 million it’s tracking now, the trends are still fascinating. The data are even sliced up based on types of activity: walking, running, cycling and more.

Go have a look and see how active your city is.