Drone manufacturing king DJI has a plot to expand its unmanned aerial empire. It’s teamed up with prestigious VC Accel to launch the $10 million SkyFund, which invests in companies expanding the drone market — and DJI’s sizable slice of it. Today SkyFund revealed to me that its first investment goes to DroneBase, which lets any business rent a drone and pilot.

Normally, businesses would have to constantly upgrade drone hardware that spends most of its time idle, plus hire people to fly them. DroneBase gives customers the aerial photo, video, mapping and data benefits without the hassles of ownership. Here’s an example of the aerial footage DroneBase can produce

DJI, Accel and DroneBase repeatedly refused to disclose the amount being poured into the startup’s ongoing seed round, but SkyFund was designed to make $250,000-plus investments. “We’ve been really pleased with the volume of inbound interest since we launched the Skyfund. Hundreds of entrepreneurs have come to the door,” Accel partner Miles Clements tells me.

It’s not the only UAV fund. Airware’s Commercial Drone Fund coincidentally launched on the same day as SkyFund back in May, and backs partners for Airware’s drone operating system.

Since DroneBase came out of stealth in April, it’s grown its international business and focused on large enterprise customers. While it will still do one-off jobs gathering photos and video for real estate agents, it sees a brighter horizon doing recurring or multi-site flights to collect data for construction, mining and oil and gas companies.

Clients tell DroneBase what info or imagery they need, it finds a nearby pilot with the right drone, the pilot does the fly-overs, and the client gets the assets quickly and affordably. “I’ve seen company after company get burned” when they try to buy their own hardware, DroneBase co-founder Dan Burton tells me. DroneBase’s services cost about $400 to $900 per gig.

Most directly, DroneBase competes with SkyCatch, which has raised about $25 million to create a drone services marketplace. Burton criticized SkyCatch, though, saying it keeps the best gigs for itself and only farms out less lucrative and more annoying jobs to its external network of pilots. DroneBase is a pure-play marketplace that offers all its jobs to its network. But at the end of the day, DroneBase’s opportunity is bringing services to companies that don’t use drones yet at all.

Here’s why DJI putting money into DroneBase is so smart. Both get a lot more than just cash or the chance at some home-run returns.

DroneBase needs to standardize the output from its pilots the best it can. The easiest way to do this is to get them all upgrading to the latest DJI equipment, because it already has a dominant market share. This way, different pilots doing jobs on different construction sites across the country that are run by the same company all produce equivalent data.

By taking the investment from DJI, DroneBase can get early previews and access to next-gen DJI hardware and arrange discounts for its pilots as it pushes this standardization. 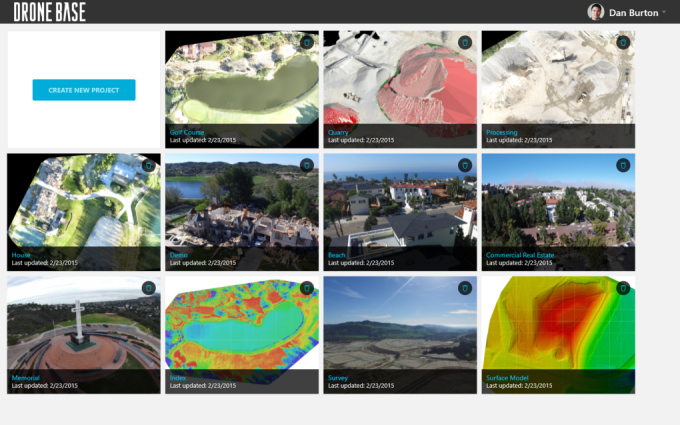 In return, DJI gets early feedback on what commercial drone operators need and what’s wrong with its drones. DJI has raised over $105 million in funding and now has a valuation around $8 billion, giving it capital to invest. DJI built itself up as the premier consumer drone seller, but needs more expertise to conquer the rapidly growing commercial drone business.

The little copters are so much cheaper than planes, helicopters or satellites that companies used to rely on for aerial data, so there’s a landslide of shifting budgets for it to capture.

Plus, DJI obviously thinks drones are the future, so backing what could become the de facto drone services marketplace could be a very wise investment. It doesn’t hurt that making DroneBase DJI’s go-to service provider will give it some serious lift.

It’s a “symbiotic relationship,” Clements says. Burton had a soft spot for the Chinese robotics giant, telling me “The first drones I built were DJI kits.”

Clements concludes that DroneBase might not be the “sexiest” technology company. It’s not doing computer vision auto-avoidance or delivering medicine. But he believes it’s so early that now’s the time to back fundamental building blocks of the drone ecosystem.