The idea of Apple Music struck fear in the hearts of listeners like me. The company had enough money to buy exclusives that could fracture and balkanize the world’s music catalog. The problem with exclusives on services like Tidal or Spotify is that only the tiny percentage of people who pay for their subscriptions can hear these songs when they want. It could have been the same with Apple.

But it turns out that through Connect and Beats 1 Radio, Apple Music has built a strategy that attracts debuts from the biggest artists in the world and makes them available to everyone for free.

This in turn attracts users to Apple Music’s free trial. Plus it’s a lot more friendly to listeners.

Music blog Hits Magazine yesterday reported in its “Rumor Mill”  that sources at the major labels say Apple Music has hit 10 million sign-ups, though those are all still free trials. At the very least, Apple CEO Tim Cook said on last week’s earnings call that Apple Music has “millions and millions” of users and 15,000 artists signed up for Connect. For reference, Spotify launched in 2008, took two years to hit 10 million users, and it now has 75 million total users and 20 million paid subscribers.

You Hear It First

Yesterday, the brand new music video for The Weeknd’s smash single “I Can’t Feel My Face” dropped on Apple Music Connect, the only place it’s available. In just the last few weeks, Apple Music got to premiere new songs and videos by Drake, M.I.A., Skrillex and Vic Mensa, and Black Eyed Peas. That’s because it’s not locking them behind a paywall. Instead, it pushes them to as many people as possible. In some cases, like with Eminem and Drake, Pitchfork reports Apple is even paying to help produce the music videos. 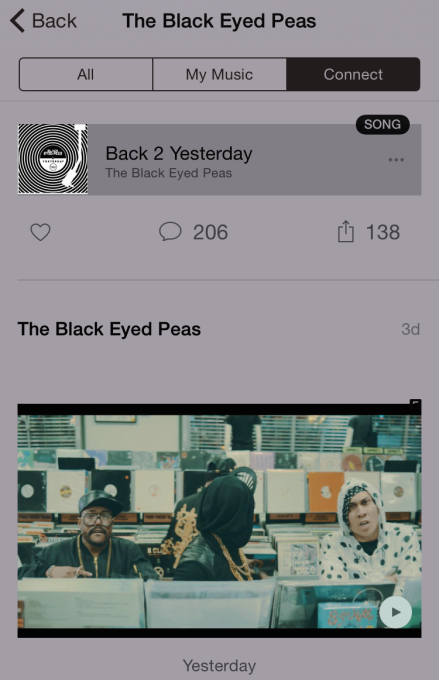 Judging by past debuts, Apple Music isn’t trying to permanently keep the songs off other services. Some of its previous premieres like Pharrell’s “Freedom” and Eminem’s “Phenomenal” officially appeared as audio tracks on YouTube and Spotify several days later. The video for “Yesterday” was officially uploaded to YouTube by the Black Eyed Peas just hours after it debuted on Apple Music Connect.

Apple declined to comment when asked about its strategy with premieres.

Using its reach and connections to rope in premieres could offset Apple Music’s product problems. Lauded Apple blogger Jim Dalrymple recently blasted the app for making songs disappear from his collection and failing to work as expected. iTunes now has so many features and content types crammed in that it’s a total mess. But Apple Music is making progress, judging by the early sign-up momentum.

First, the songs get played on Beats 1’s primetime morning slots from 9am to noon PST, and start to appear on Apple’s Pandora-style iTunes Radio stations. Then artists drop them on the Apple Music Connect feed, which lets full songs be reshared on social networks like Twitter and Facebook. All of these channels are open to anyone on web or mobile without a $10 a month Apple Music subscription. 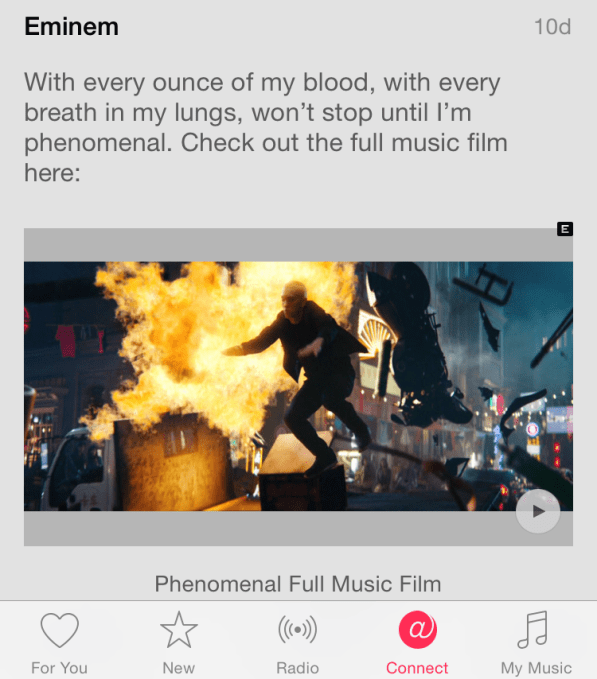 Apple’s editors can then push them into Apple Music’s For You or New tabs to score them even more plays from subscribers. Eventually in many cases, the singles get pulled back behind the paywall so they’re only available to subscribers to earn artists royalties, while the videos stay available for free.

What’s in it for the artist? To start, massive exposure. This is the modern Ed Sullivan Show, the Rolling Stone cover, the MTV Total Request Live. Smart musicians know that fame equals concert ticket and merch sales, sponsorships and licensing deals.

But rather than leave that relationship vague, this strategy gets people from around the web to follow artists on Apple Music Connect.

When musicians put their next tour’s tickets or new t-shirts on sale, they can hit all their Connect followers with the links to go buy them. It also creates a beachhead from where artists can get their fans to share their latest songs to social. 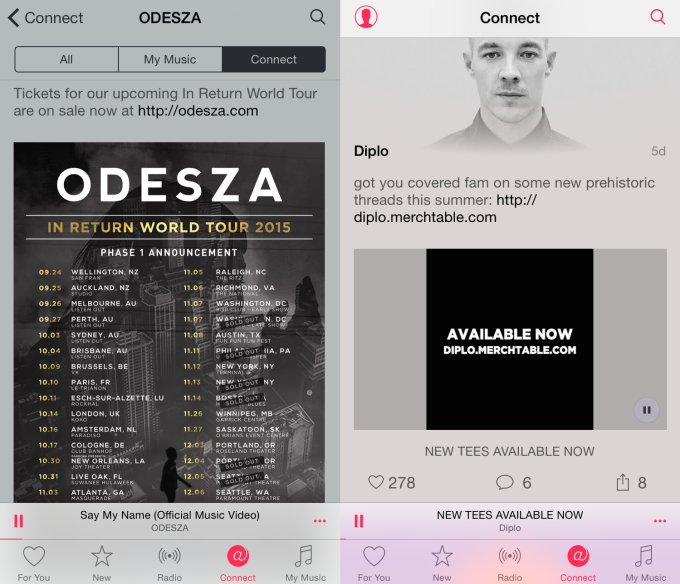 Artists lure fans to Connect with free content, then earn money by showing them links to buy concert tickets and merchandise

This trade of content for exposure isn’t unlike what Apple was doing with iTunes. If artists gave it an album first or included iTunes only tracks, they’d get promoted in eye-catching banners at the top of the store, which sold lots of downloads. People are buying less and less music, though, so Apple has wisely shifted its value offer to driving ticket and merch sales where the real money is today.

Spotify’s service has long been built around search and personalization. That’s useful for hardcore listeners, but gives it less power to pump massive listening numbers into tracks it wants to promote like Apple Music and Beats 1 radio’s one-size-fits-all suggestions.

And while Spotify’s ad-supported free tier users can listen to whatever they want on the web, those outside the paywall are stuck with shuffle play on mobile. That makes exclusives or premiers less accessible than on Apple Music. When everyone’s trial expires in two months and they’re asked to pay, Apple Music will need this firepower to beat Spotify’s free option. 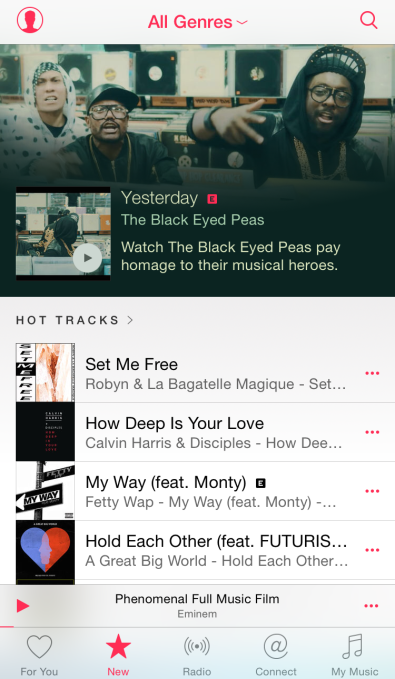 The last will be the hardest to secure. Apple’s previous attempt at social music, Ping, flopped hard. There are so many tabs and features in Apple Music and especially iTunes that Connect can feel a bit buried.

The app could do a better job of helping you follow your most listened to artists on Connect rather than forcing you to manually seek them out. Suggesting you follow the last few musicians you played might be a smart feature add. The Black Eyed Peas got a few thousand Likes on what they posted on Connect, but have 46 million fans on Facebook .

Apple luckily has two huge aides in this quest:

All it needs is a reason for people to check out Apple Music in the first place, and that’s where the premieres come in. The streaming services have roughly equivalent back catalogs of music. But even if it only gets them a few days or weeks early, Apple Music could sign up novice streamers by being the only place to hear that hot new song for free.