Flickr announced today it’s bringing back its “Pro” subscription plan aimed at power users of Yahoo’s photo-sharing service, which will introduce a variety of new features, including access to improved analytics, software discounts, and more, as well as allow for an ad-free experience. Pro users will also again receive a “Pro” badge highlighted on their account, which will indicate their status.

As you may recall, Yahoo made a number of significant changes to its pricing tiers in spring 2013, which saw it introducing new tiers like “ad-free” and “doublr” (double the storage space), while dropping the older version of Flickr Pro. At the time, the company claimed that doing away with Pro wouldn’t make much difference because Pro hadn’t performed very well previously.

That being said, Yahoo at the same time made the confusing decision to grandfather in the existing Pro members, saying that it would continue to offer renewable subscriptions even though new users couldn’t sign up for Pro and anyone letting their subscription expire would also lose access to Pro for good. In addition, it removed the Pro badge this time and eliminated the ability for anyone to “gift” Pro subscriptions.

However, in light of increasing competition from startups aimed at professional photographers –like EyeEm or 500px, the latter which is fresh off a new $13 million round of funding just this week — it seems that Yahoo is making more of an attempt to woo professionals back to its platform…or at least keep those pros it still has. 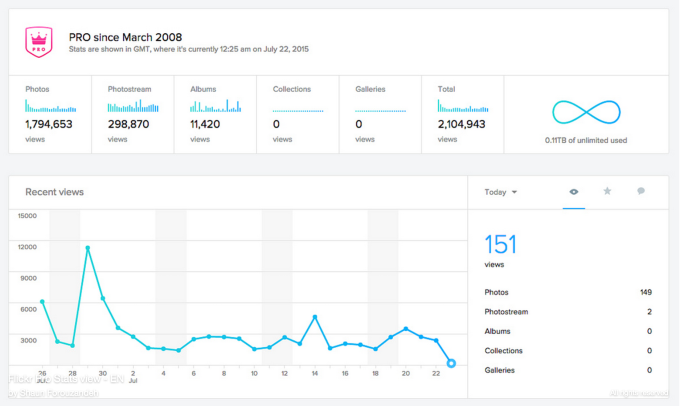 According to Flickr, the revamped Pro memberships will include access to new and improved stats, including improved navigation for viewing this data on mobile devices. The analytics will allow pros to better identify which photos are having the most impact and which see the most traffic. Users can track their view counts by photos, photostream, albums, collections and galleries, as well as favorites and comments.

Pro members will also not be subjected to ads when viewing their own photos or those from others, and they’ll once again get the “Pro” badge on their profile.

In addition, Pro members will get a few discounts on photo products, including a 20 percent discount on Adobe’s Creative Cloud Photography plan for yearly subscribers, plus free shipping on Flickr merchandise and half off international shipping with a $25 minimum purchase. However, these discounts will only be available to those who sign up for Pro on an annual basis, notes Flickr.

Those Flickr users who were already paying for a “Pro” tier (paid subscription) will continue to receive the benefits they had before, including unlimited storage space, while also gaining access to the new features. Meanwhile, those who had been paying for the “ad-free” tier will now be migrated over to Pro with no change in their plan’s pricing. (Ad-free was also $49.99 per year.)

More details on the upgrade process and the changes are here on Yahoo’s Help site. Alternately, users can visit their Account page to upgrade to a different tier if they choose.

Flickr tells TechCrunch it made the change in response to user feedback.

“Over the years, we’ve made changes to our account options as the needs of our members have evolved,” a spokesperson explained. “With the success of the Flickr 4.0 launch, our new and existing members have asked for improved photo stats so they can learn more about the engagement on their photos along with the revival of the Flickr Pro badge.”