Tile, the small, square-shaped lost item tracker which recently raised an additional $3 million from Khosla Ventures as an extension on its earlier $13 million Series A, had previously indicated that its business model would eventually include a replacement service that allows customers to purchase new Tiles just ahead of the battery wearing out on their old ones.

Now, select Tile customers are being presented with exactly this option. This week, the company started sending out emails promising a special deal on “Tile renewals” to some of its earliest backers.

The Tile tracker is one of many lost-item finders on the market today. It takes advantage of Bluetooth connectivity and an accompanying smartphone app to help users locate any item they’ve attached a Tile to – whether it’s a set of keys, a purse or a bag, a bike, or anything else. What makes Tile’s implementation interesting, however, is that it’s not just a utility. Tile is growing a community of Tile device owners who, combined, can work together as a network in order to locate people’s missing items even when the original owner is out of Bluetooth range.

The company said last month that it has 250,000 unique finds per day across 214 countries and territories, and it has shipped 2 million devices to date. 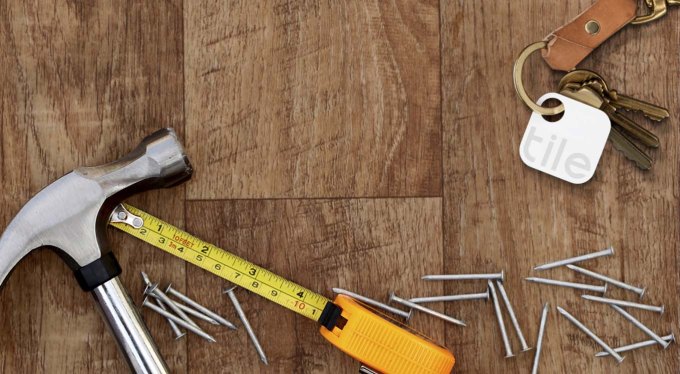 But unlike some of its competitors, Tiles don’t last forever – only a year. By design, the Tile tracker doesn’t include a user-replaceable battery – the thinking being that, when the battery dies, many consumers won’t bother to buy a new battery and swap it out. They would just throw the Tile in a drawer and forget about it. Plus, by eliminating the need to make the battery accessible to end users, Tile can take more liberties with its hardware design.

In order to maintain its relationship with customers, Tile co-founder and CEO Mike Farley said earlier that the company would introduce a replacement program for its devices. In June, he indicated an announcement about this would arrive in a few months’ time. 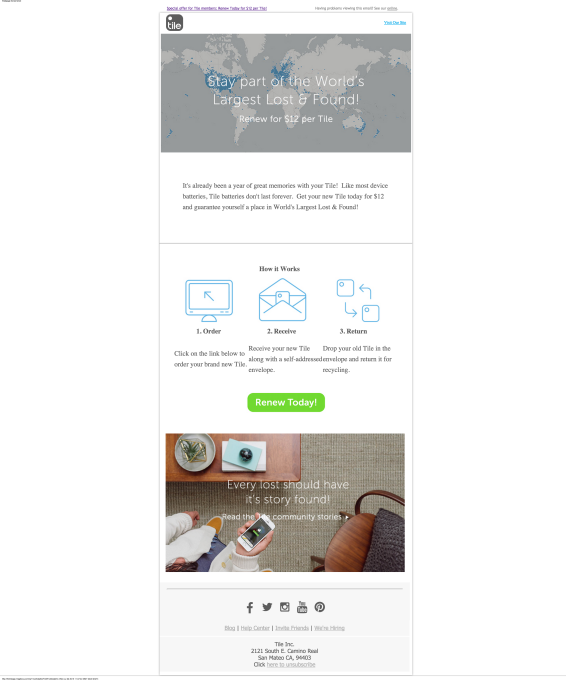 But already, some Tile customers are receiving emails offering them the option to renew for $12 per Tile. The emails are timed so that only those who were among the very first Tile device owners are getting this upgrade option at present.

The promo prices may not be set in stone indefinitely – future renewals could be higher or lower, depending on the program’s success. As Farley notes, “anything’s possible in the future…we’re obviously doing something new here in the consumer electronics space. It’s a little bit different.”

The company has not made a formal announcement about its renewal program, because it’s still working out the details. However, the renewal option is arriving just ahead of Tile’s plans to roll out new hardware. Farley had previously said that there would be a hardware update ahead of the 2015 holiday season.

When asked if those who are renewing their Tiles today would be receiving old or newer hardware, the CEO simply replied that “members who renew will get the latest hardware.”

However, Farley also said that Tile renewals would ship as quickly as new orders would – meaning, about a day after the order is placed. Since new hardware hasn’t yet been announced, that means users may be getting the same Tile they already have today as their replacement. That being said, the company clearly has some sort of plan to make sure that those who renew don’t miss out on new hardware when it becomes available. The company declined to provide further details on how that process will work, though.

Upon renewal, Tile customers are also offered the chance to share their Tile order on social media in exchange for additional savings on future orders. 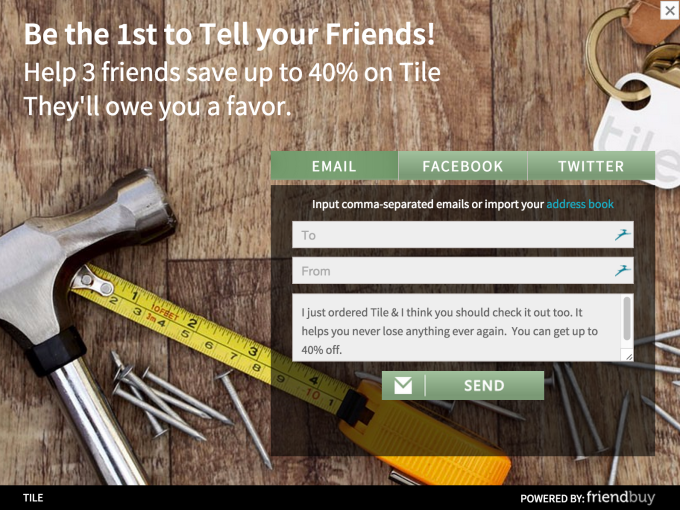 In addition, the renewal service helpfully includes a recycling component. When customers are sent their new Tile, they’ll also receive a self-addressed stamped envelope which is used to return their old one.

This is an important component to Tile’s renewal program, Farley says, pointing out that 40 percent of consumer electronics were recycled in 2013, according to the EPA.

“We recycle 99 percent of the content from the Tiles…that ensures they don’t end up in landfills,” he says.