Cazena, a new platform that wants to make it easier for enterprises to process their data, today announced that it has raised a $20 million Series B round led by Formation 8. Other participants include Andreessen Horowitz and North Bridge Venture Partners, who both also participated in the company’s $8 million series A round last October.

Cazena was founded by a number of former Netezza employees and is now led by Prat Moghe, who was Netezza’s general manager for data compliance before its acquisition by IBM in 2010. He then became the senior vice president for strategy, product and marketing at Netezza under IBM’s ownership.

After a few years at IBM, Moghe decided that it was time to look at some of the problems Netezza was trying to solve from a fresh perspective. “We started thinking about the next decade of data processing and how enterprises are struggling with the new big data stacks like Hadoop,” he told us. “Every enterprise — and particular the medium to large enterprises — they were actively looking at the cloud to speed up the agility of processing. But they were being held back by the complexity and security issues [of the existing platforms].” 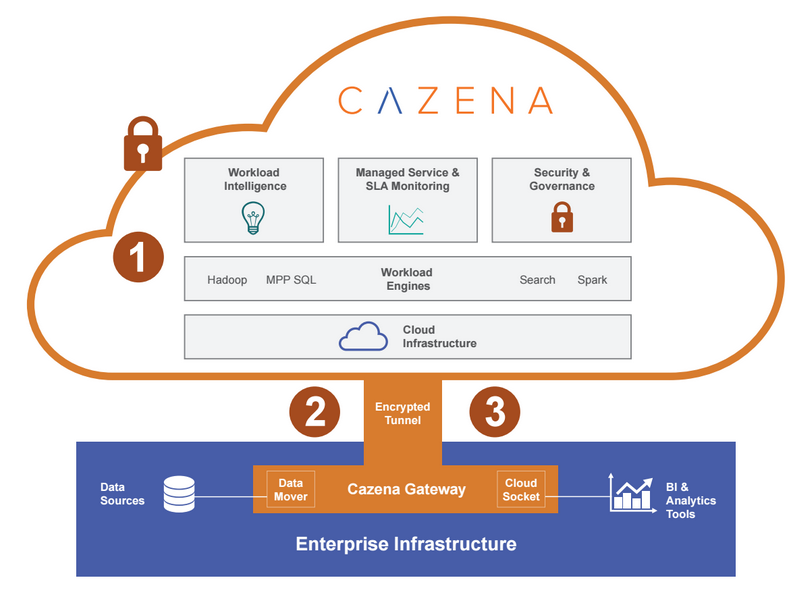 Cazena aims to greatly simplify big data processing for businesses. Ideally, it should only take three clicks to set up a data processing job with Cazena, Moghe believes (though in reality, it’s still a bit more involved right now). The service strips away the complexities by trying to automatically figure out what technology to use to analyze a given set of data. It then automatically provisions, optimizes and manages that workflow for its customers, no matter whether it’s a Hadoop, Spark or MPP SQL (think Amazon Redshift) job.

Depending on your workload and other criteria like price or how fast you need the results, Cazena will provision the right infrastructure for you and then take care of the processing. “Ultimately, data as a service is a new category and we want to help big enterprises get into the cloud,” Moghe said.

It took the Cazena about two years to get to this point where it’s openly talking about the new product. But while Moghe told me that the company is already running some beta tests with a small number of large companies, Cazena isn’t quite ready to open up its service to all yet.

Once it does launch, though, it will do so with a relatively unusual pricing plan. Moghe tells me that the plan is to charge a single fee for the service that will include all of the cloud costs, support and an SLA. He argues that current cloud processing systems that charge by gigabyte or node are too unpredictable for enterprises.

The new funding the company announced today will go toward building out the company’s technology, sales force and partnerships.