Personal styling service Trunk Club first got its start by appealing to men who don’t like to shop by offering to ship hand-picked designer clothing to their homes for free. Then, customers only paid for those items they kept. Today, in the company’s first major announcement following its acquisition by Nordstrom last year, the service is expanding this same concept to women. The company is now debuting Trunk Club for Women, which will work much like the men’s service does.

The women’s service is not yet broadly accessible – currently, a sign-up page allows women to enter in their email address if they want to participate in the early trials ahead of a larger launch planned for this fall. Those who are selected to participate will be able to either receive their trunk shipments by mail, or can pick up items from clubhouses in Chicago, Dallas, L.A. and D.C.

Like Trunk Club’s service for men, the new option will also include the ability for customers to work one-on-one with a personal stylist, who handpick a selection of clothes that fit the customer’s size, style and fit preferences. These items are shipped to the customer’s home for them to try on. Whatever they like, they keep and pay for, but the rest can be returned for free.

Customers can also request new clothing from their stylist at any time, instead of waiting for a monthly package. And there are no additional fees for the styling service. Like the men’s service, there’s also no ongoing subscription payment – you simply request a “trunk” (a box of items) when you’re ready, and pay for what you don’t return after 10 days.

Because of its relationship with Nordstrom, Trunk Club for women will carry clothing that’s similar in price and quality to what’s available in the store, including brands like Vince, Theory, DVF, Equipment, rag & bone, Joie, and others. There are no extra markups on the clothing, so it’s not more expensive than shopping in a Nordstrom store.

“We’ve been lucky enough to lean on Nordstrom for inventory needs while we build our brand identity,” a Trunk Club spokesperson explained to us, when asked about the available inventory. They also added that future inventory plans are still being worked out, but “Nordstrom continues to be a vital partner in the process.”

The company, which was founded by Brian Spaly, also a Bonobos co-founder, doesn’t disclose the number of customers or the sales revenue that Trunk Club today brings in. However, at the time of its acquisition (which was reported to be $350 million), Trunk Club was on track to double its revenue to $100 million-plus in 2014 and was profitable, if barely so.

Through Nordstrom, the service has been able to take advantage of the retailers’ larger supply chains and infrastructure, including its UPS contract, which helps it cuts costs. Meanwhile, Nordstrom could direct customers to Trunk Club, cutting down on new user acquisition costs. Meanwhile, Trunk Club could help Nordstrom with increased foot traffic as customers visit stores to return or exchange purchases.

While Trunk Club was solving a need many men faced, it was suspected that a men’s offering would always be a smaller piece of the piece of the overall pie when it comes to a clothing styling service. That’s what makes Trunk Club’s expansion into women’s apparel so interesting. 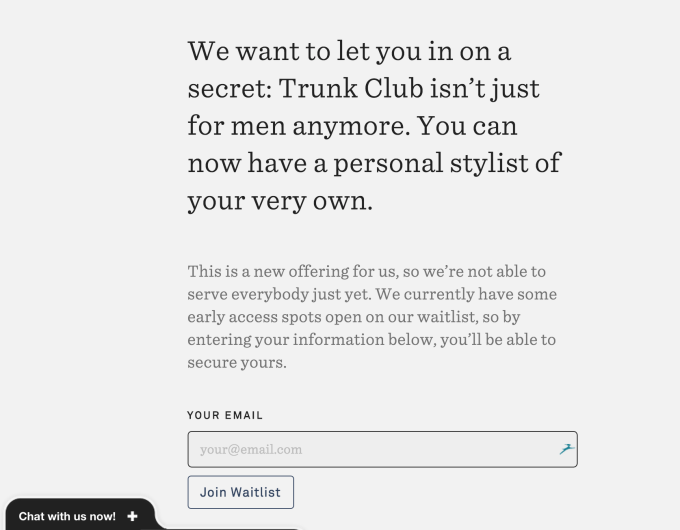 Basically, the service is a way to shop and try on garments in the home, without worrying with the hassles of returns – something that not all e-commerce sites today make easy. If anything, some sites even make managing returns just enough of a hassle that you end up keeping clothing that doesn’t quite work instead of just shipping items back. That’s certainly helped fuel the rise of secondhand clothing resale marketplaces, many of which sell items that were sent to them “new, with tags,” thanks to customers’ recent e-commerce blunders.

In addition, the fact that Trunk Club’s clothes are selected according to your personal tastes allows customers to have a shopping experience that’s somewhat similar to being in a retail store where they could have otherwise worked directly with a salesperson to find items. This personal attention means customers are less likely to be unhappy with items they receive, and the longer they work with the stylist, the better the selections can become over time.

Trunk Club for women is taking sign-ups here, but it’s still just a waitlist for now.