Ancestry.com launched in the early 80’s and went public in 2009. It is now the largest genealogical database in the world, holding more than 16 billion family history records from all over the world and more than 70 million user created family trees.

The company saw an opportunity in consumer genetic testing similar to 23andMe three years ago and launched AncestryDNA as a subsidiary of Ancestry.com. Ancestry’s patented algorithm began matching users to relatives as well as DNA matches to ancestors as far back as the 1700’s.

The company is now taking those family connections a step further with the introduction of generational health information.

Combined with the breadth and scale of Ancestry data, we expect AncestryHealth to be a key piece of the puzzle as we look to understand how health is passed down through generations. Ancestry CEO Tim Sullivan

AncestryHealth is a free platform that allows those with or without an Ancestry profile to record their family health history, going back several generations. Those on the site can create a family tree and then fill in health information associated with each family member, whether living or dead. The family tree can then be populated with health and genetic data to help individuals and their families keep a record to share with their physicians and future generations.

AncestryHealth is only meant to go a couple of generations back and asks for the same information a doctor might ask about the health of your parents or grandparents. You also don’t need to provide genetic testing through AncestryDNA, but those who have gone through that process can automatically populate that information on the AncestryHealth profile to make things easier. 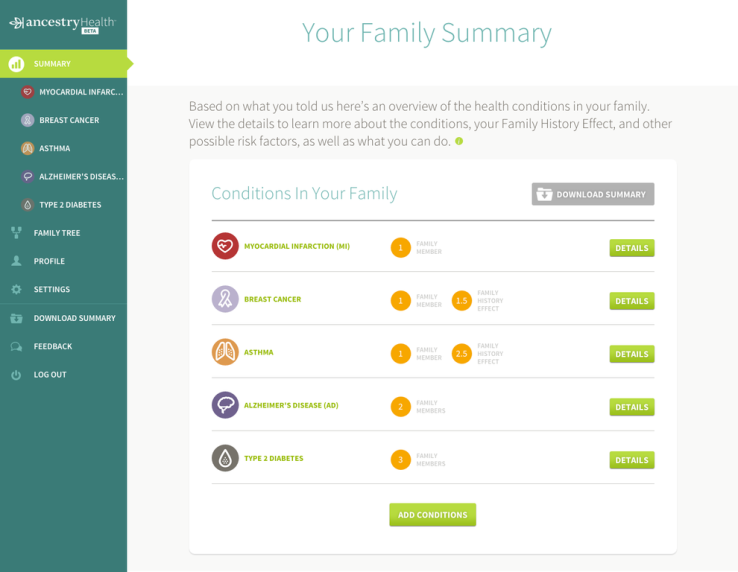 I do not have a profile on Ancestry.com, nor have I been tested on AncestryDNA, but I was able to go onto AncestryHealth and populate my own health family tree in a few minutes. I already knew some of the conditions in my family, but was unsure how grandparents on both sides died. Old age? I remember my great-grandmother died of a stroke in her 90s but that was it.

AncestryHealth is likely more useful in combination with AncestryDNA info. My dad, an avid genealogist and exacting engineer, has added his test to the mix and is quite the contributor to our family history records. So I asked him what he thought about the new AncestryHealth. Here’s what he had to say:

Tracing health would be important regarding 20th century ancestors and maybe a few 19th century ancestors. It is very difficult to get health information further back than the year 1800 unless one or more ancestors contracted leprosy, tuberculosis, the Spanish flu or yellow fever, along with a myriad of other infectious diseases, none of which will affect OUR health because they are the result of bacteria or viruses. The tendency toward cancer, heart disease, dementia, and sickle cell anemia may not be listed earlier than the 19th century since medicine was so primitive before then.

However, for people whose ancestor’s health information is available for the last 200 years, AncestryHealth would be potentially invaluable.

For me, there aren’t any earth-shattering insights here, especially not for just a couple of generations back, but I could see it as a useful tool for future health record-keeping.

“Combined with the breadth and scale of Ancestry data, we expect AncestryHealth to be a key piece of the puzzle as we look to understand how health is passed down through generations,” Ancestry CEO Tim Sullivan said.

Dr. Cathy A. Petti joined Ancestry to head up the new site as its chief health officer. Petti comes to AncestryHealth from HealthSpring Global, a life sciences research and investment firm.