For the first time in the three years of its existence, NY-based Blue Apron is releasing a mobile app for iOS.

The new app gives Blue Apron members the ability to make changes to their recipe selections and deliveries, and share their finished meals. But most importantly, the app will give users a full-blown cooking companion, complete with video tutorials, tips and tricks, and suggested cooking tools to make the best possible meals.

After logging into the app via Facebook or email address, users will be shown this week’s scheduled deliveries, including photos of the finished meals, ingredients, meal descriptions, cooking time, and the same instructions that Blue Apron users are currently receiving on paper cards with each meal. But the app takes it a step further.

Whether you’re a well-versed Blue Apron user or not, it’d be easy to miss the extra video content produced by Blue Apron. The company offers tutorials on how to be better at cooking in a bite-sized format, such as a video explaining how to best zest a lemon or dice an onion. These videos are somewhat buried on the website, but the new app brings them straight to the forefront with each meal. Blue Apron currently has more than 50 videos uploaded to the app with more being added regularly. 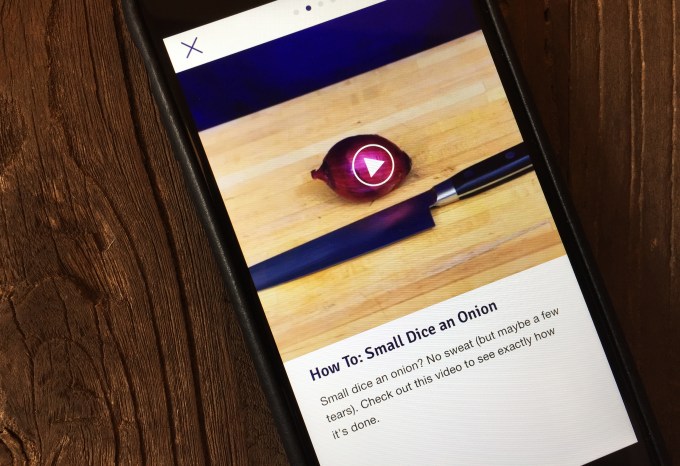 The Blue Apron app also includes items from the Blue Apron marketplace (pepper mills from Greece, special salad bowls, etc.) that might help users on their path to chef-dom.

In fact, the app even comes with a timer so you don’t have to switch between your phone’s alarm app and the Blue Apron app.

While Blue Apron’s main revenue stream comes from delivering pre-portioned ingredients (and experiences) to their users each week, the company also curates instruments and tools from all over the world to be sold in its marketplace. With the app, distribution of both the video content and items from the marketplace should be significantly expanded.

But it’s not just about handling the user’s account and having a mobile cooking companion. The Blue Apron team also understands that its members love to share their finished work, “for better or worse,” added CTO and co-founder Ilia Papas. 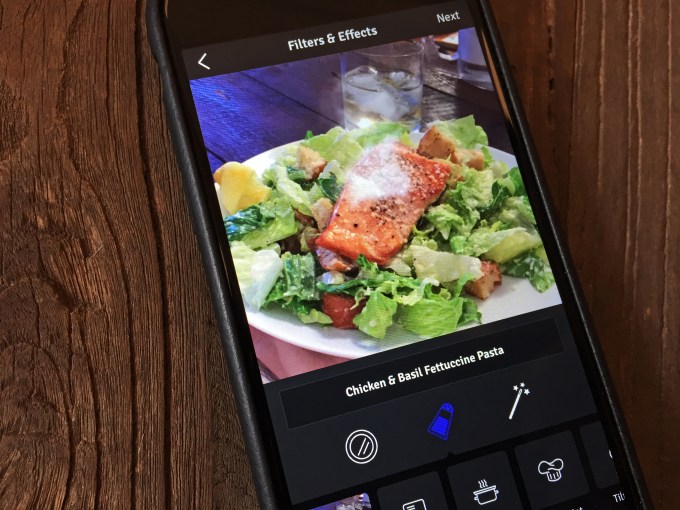 That said, the app includes a share tab that hooks directly into the smartphone’s camera. Taking a page out of the Instagram playbook, the app lets users choose between four filters (all named after Blue Apron HQ locations) that are designed specifically to enhance lighting for amateur food photographers (aka Blue Apron users).

The Steam filter will add animated steam to any photo, which is resizable, movable and rotatable. Images that use the Steam overlay will be turned into four-second videos, and everything edited through the Blue Apron app is easily shareable to Facebook, Instagram or Twitter.

The app also has a tab near the top that allows users to share recipes, tips, etc. via iMessage, email, and other more private forms of communication.

All recipes on the app are rate-able, which will likely give Blue Apron even more feedback from users about which recipes are best.

Blue Apron already sees a high level of engagement and feedback from users, despite the fact that ratings and reviews are somewhat hidden on the website.

With more than 800 unique recipes, and no repeat recipes in the same year, even more feedback will allow Blue Apron to tweak their hit recipes and knock them out of the park the second time around. It will also give insight into what type of information (whether it’s video content or text-based tips) users need to properly cook their meals. (Apparently, lemon grass is a real head-scratcher for most people.)

The Blue Apron app is currently available only on iOS, and can be found here. Android is coming soon.