Gmail has hundreds of millions of users checking it multiple times every day. And if Aleem Mawani has his way, it’ll have a development platform that’s as big as Facebook.

Mawani heads up Streak, a company that builds a software development kit for applications that integrate with Gmail. Streak’s InboxSDK integrates with extensions in Chrome and automatically updates whenever there’s a change in Gmail, meaning companies don’t have to alter their apps whenever Gmail updates something new.

Those integrations are designed to show up seamlessly in the Gmail interface, like Dropbox functions added to files or, in the case of Giphy, a small button that opens a search interface for gifs that users can add to messages. When an extension loads, it downloads the latest version of the platform and runs that app within Gmail. 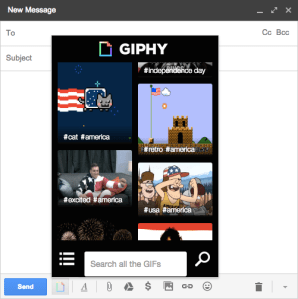 The company says it has around 2.5 million people who are using apps built with Streak, which include apps from companies like Dropbox. When I spoke to Mawani earlier this month, that number was around 2.3 million — so the company’s user base is growing pretty quickly. It has 350 registered developers like Dropbox and Giphy, though there are more playing around with it. The developer base grows 20 percent and the user base grows 30 percent every week, he said.

“The interesting thing is Gmail, like Facebook, people use it every single day and use it intensely for hours at a time,” Mawani said. “It seemed very strange for me that many companies weren’t even integrating [deeply] with Gmail. People are in Gmail the whole day, and [companies] want to convince them to go somewhere else.”

Sometimes the changes to Gmail are big, but the Streak team generally tries to have an update out in a few hours that ensures that it’s keeping up with those changes. For example, when Gmail changed its compose menu, the team had to grind out a big update that took about four hours to get out, Mawani said. Most of these updates happen over the course of a few minutes, he said.

Streak also builds customer relationship management software for Gmail, which was its primary business, Mawani said. It recently opened up that tech to build InboxSDK. It currently works with Gmail, but a Google Inbox version is coming soon, and Streak plans on doing other email platforms like Yahoo Mail and Outlook, he said.

Of course, there’s always a chance that Google could implement something like this, but it doesn’t appear to be happening any time soon. Mawani said changes to Gmail only come every couple of months. He said a tool like Streak adds value to Google’s Gmail customers and enterprise customers, so the company likes it.

“[Google building a Gmail SDK] would be a really good thing for the industry, for startups it’d be great, and even for us it’d be great,” he said. “The reason we’re building this SDK is to make it easy to build apps in Gmail. If they end up building it, great — that’s less for us to do.”

Streak is based in San Francisco and has eight employees. The company came out of Y Combinator in 2011, and has raised around $2 million in financing from investors like Chris Sacca and Garry Tan.