While there are a number of applications on the market that let you scan barcodes in order to compare prices, a new fashion-focused app called Craves launching today instead lets you just snap photos of the clothes you want and it returns visually similar results in seconds – no barcode-scanning required. Then, when you find something you like, you can purchase the item directly from the app itself.

According to co-founder Scott Cormier, who previously ran the mobile team at Wave Accounting in Toronto, the idea for Craves was inspired by watching his wife, Nadine, use her smartphone to help with her clothes shopping.

“She’d routinely snap photos or save screenshots of outfits she wanted to track down later,” he says. “She’d save them all to an album on her phone and then try to track them down via Google, Pinterest, etc. whenever she’d have a spare moment.”

Thinking it would be interesting to try to use technology to solve the problem of helping women like his wife find out where to buy things they loved – especially when online shopping so often led to out-stock-items, broken links and untrustworthy retailers – Cormier came up with the idea for Craves, which analyzes a photo in order to help consumers find things that look like the item in the picture. These photos can be snapped right from the Craves app, or they can be uploaded from the phone’s Camera Roll. 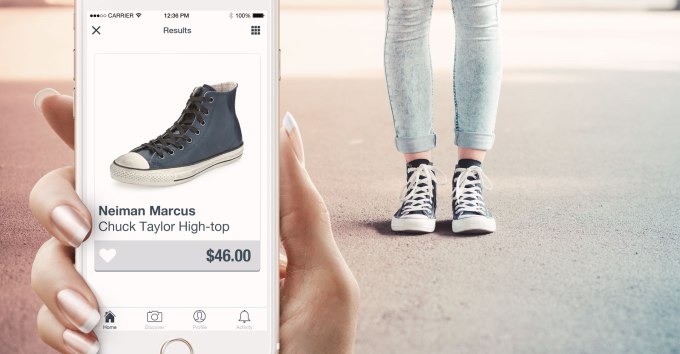 And beyond just serving as a fashion-finding utility, Craves also has a social component, allowing shoppers to follow friends and influencers, as well as browse through trending items, favorite results, and receive sale notifications.

Craves is not exactly a startup in the traditional sense, however. Instead, Cormier explains that it was incubated within visual search technology Slyce, and now operates as a subsidiary of Slyce, like the company’s other consumer apps, including Pounce and SnipSnap. He says he initially reached out to Slyce founders Cameron Chell and Erika Racicot after hearing about the efforts Slyce was making with visual search, and they decided to build out a prototype of Craves to see if could work.

The product, which is also co-founded by Racicot who is Craves’ COO and supports the Slyce side of the business, has been in development for just under a year, and most recently was in private testing for around four months with some 200 people while the team worked to improve the relevancy and quality of its results and curated the merchants and brands that Craves features.

Currently, when a user makes a purchase in the app, Craves receives affiliate revenue. But in the future, the company will look into expanding to other revenue streams.

The company is also working to develop a checkout experience that takes place directly within Craves instead of sending users to retailers’ mobile sites as it does today, and the team will improve the personalization capabilities of the app along with the merchant line-up.

Craves arrives at a time when Google Shopping is being challenged by the visual bookmarking and search service Pinterest, which often serves as a better tool for product discovery for consumers. Similarly, Cormier believes that Craves’ use of imagery can offer an improved shopping experience compared with traditional Google Search.

“We feel that searching for products with photos and screenshots is drastically easier than trying to find the right keyword combination to plug into Google,” he says. “Much in the same way that a picture is worth a thousand words.”

Meanwhile, the app also addresses one of the problems that plagues Pinterest today – often the shared images on Pinterest are older, recycled links that lead shoppers to dead ends – out-of-stock inventory, bad links, or unknown retailers. Craves instead connects them to trusted retailers and products they can buy now.

Craves is live to the public today and is a free download on iTunes.