India’s e-commerce boom continues unbounded. Beyond the top players such as Flipkart and Snapdeal raising billions to support their capital intensive businesses, startups in other parts of the online retail space are raising significant numbers too.

One such company is MySmartPrice, a Hyderabad-based price comparison and search site, which has landed $10 million. The round was led by Accel with participation from Helion Venture Partners. MySmartPrice, which was founded in 2010, plans to use the fresh influx of capital to grow its focus on the offline shopping experience. The startup raised $1.3 million across two prior funding rounds.

The company began life as a tech and gadget-focused price comparison service, but over the years it has added verticals and new components to the experience. Today, it is designed to navigate the maze of Indian e-commerce sites to find specific products, and at the best prices possible.

MySmartPrice co-founder and CEO Sulakshan Kumar told TechCrunch that the site currently sees 10 million unique users each month and $120 million in GMV annually, and it is currently heavily focused on helping offline merchants reach users via its service.

“The broad vision is that we want to help people shop smarter: search for items, decide which they like and buy,” Kumar said in an interview. “We no longer want to limit the service to online. We started working on boarding offline retailers, so when a user comes to visit we can show products, availability and pricing across all stores.”

The idea, he furthered added, is to allow consumers in India to buy any item from any store. 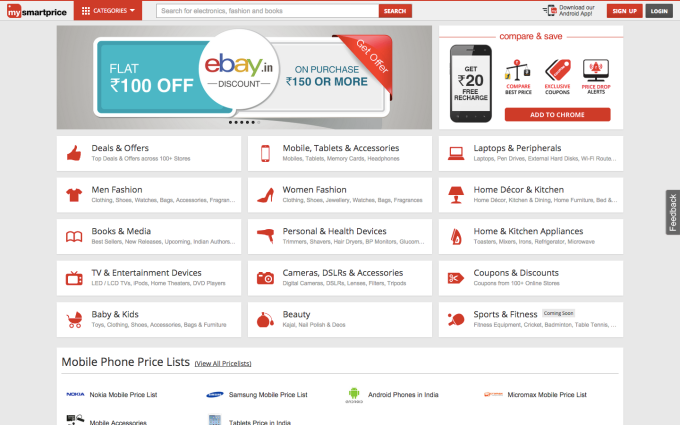 Right now, MySmartPrice has offline retail partners in three cities, with support for two more coming soon, but the service is aiming to expand to 50 cities — and 100,000 retailers — using this new funding. The company said its offline partners are already transacting $2-3 million from its site per month. It isn’t currently charging offline retailers to be on its platform, but once it reaches scale it will draw revenue either via a listing fee, or a commission-based approach which it already uses for online sales, Kumar said.

What’s particularly interesting about the service is that 60 percent of its traffic is from mobile devices. Mobile accounts for around half of all purchases, too, Kumar revealed. That’s quite different to retailers in the U.S., who are yet to see mobile surpass desktop.