Is there something in the water for peer-to-peer rental websites right now? Fresh from U.S. juggernaut Airbnb raising $1.5 billion and China’s Tujia taking in $250 million last month, Xiaozhu — another Chinese Airbnb equivalent — announced a lesser-but-not-insignificant $60 million Series C round at a $300 million-plus valuation.

The deal was led by JOY Capital, with participation from fellow PE firms Morningside Ventures, CITIC Capital and Heyu Capital, as our Chinese partner site Technode reported. Xiaozhu — ‘little pig’ in English — plans to use the fresh investment for new hires, R&D and general scaling of its business.

The service covers 200 cities across China and has 20 offices in the country. Xiaozhu also announced a new tie-in with Alibaba which will see its service use data from the e-commerce giant’s Sesame Credit credit rating system to provide enhanced user authentication to help combat fraud. 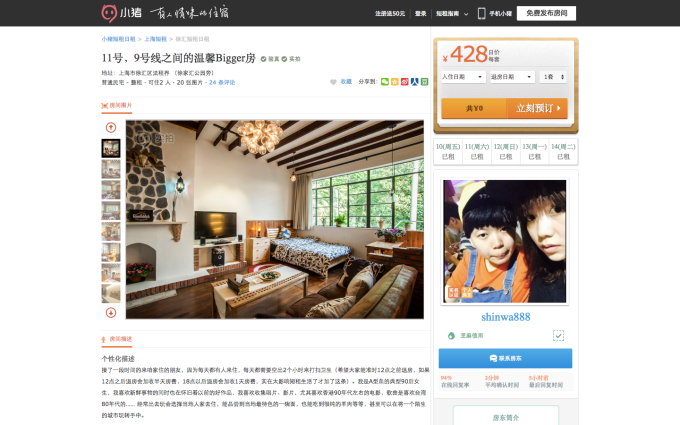 Xiaozhu landed a $15 million Series B round last summer, and an undisclosed round in 2012. The company operates in a fairly busy space though. In addition to Airbnb — which has a pretty thriving business in China; counting yours truly as a regular customer — and Tujia — which is reportedly valued at over $1 billion — Mayi, Zhuwona and Youtianxia also compete for attention in China.

“The sharing economy has a huge influence on China’s Internet sector, and our investment in Xiaozhu reflects our bullish view on how the sharing economy is bringing about disruption in traditional lodging sector,” Xiao Li, founding partner of Joy Capital, said in a statement.

This ‘sharing economy’ space is attracting serious bucks in China right now. In the past few weeks alone, Uber rival Didi Kuaidi closed a $2 billion funding round, Alibaba invested over $100 million in group-buying site Mei.com, and Baidu set aside $3.2 billion for its online-to-offline buying service Nuomi.